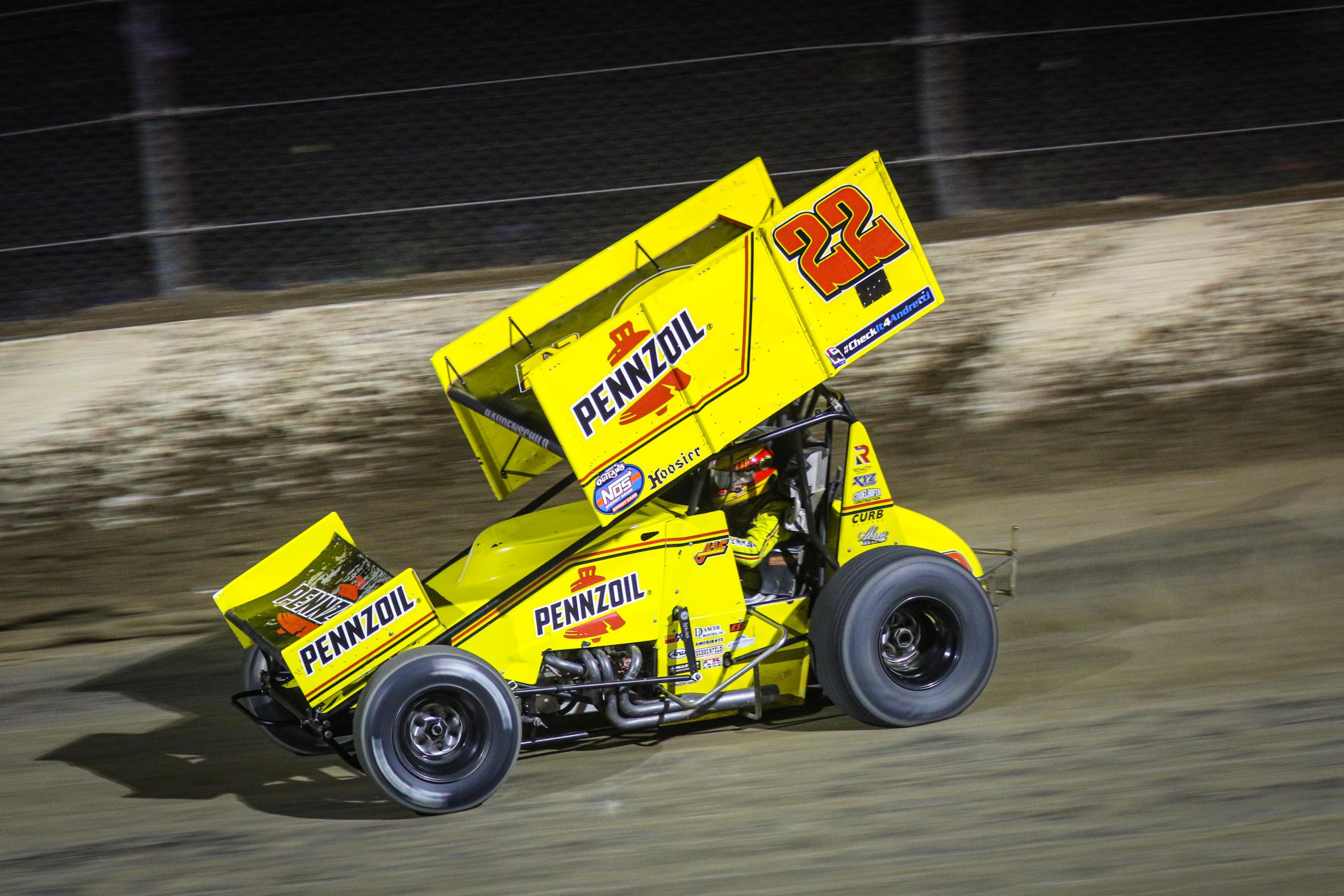 ROSSBURG, OH: You could hear the roar of the crowd over the engines during the fifth heat race Saturday night at Eldora Speedway.

One of Ohio’s legends, Jac Haudenschild, was giving fans one more salute the only way he knows how … by blasting around the cushion to win a race. It wasn’t the main event, but that hardly mattered to the capacity crowd that packed into Sprint Car racing hallowed ground.

Haudenschild was making his last Kings Royal start, and it was fitting that he was able to win the fifth heat race and earn the right to start on the front row of the 40-Lap A-Main. It almost looked like daytime with the flash bulbs going off during the parade lap.

“It was good,” Haudenschild said after finishing 14th in the feature. “I’m glad we had it on the front row. We didn’t do much in the race, but the car felt great, and Rico [Abreu] got me in the Pennzoil car for the last time. So, I’m happy about that.”

So was everybody else in the building.

It’s a track that is close to Haudenschild’s heart, not just because of the big wins, but what it means to his family, the sport, and the fans.

“I started racing here when I was younger, and this place is one of my favorite tracks,” Haudenschild, 63, said. “It felt good to run here for the last time.”

No doubt Haudenschild was still taking it in after the race was complete. Then again, in true competitor fashion, he wasn’t happy with the end result.

“The car was good,” Haudenschild said. “I didn’t make the right moves on the track. I’m glad to put it on the front row tonight … that was my highlight.”

Kyle Larson won the Kings Royal crown, but Haudenschild stole the show … even if it was just for a little while.

THANK YOU, BOSS: Kyle Larson was close to not even competing in the Kings Royal double, much less winning one of the two shows.

Rain washed out the Thursday Kings Royal program and forced officials to go to back-to-back programs on Saturday . The problem for Larson was that NASCAR boss Rick Hendrick traditionally doesn’t let his drivers race another series the night before a Cup race.

That changed Thursday night with a late phone call. Larson took a chance and asked his owner if he could be one of those few exceptions, and Hendrick didn’t hesitate to honor his driver’s request.

“I was really close this week [to not running],” Larson said. “Paul had been asking me, ‘Hey, are we going to race if it rains?’ I’m like, ‘I can’t. I’m not going to ask him for another favor.’ I’ve asked him for a bunch of favors — I feel like for the last month — and I didn’t want to use them all up.

“But Rick texted me late at night Thursday, and I was like, ‘I’m just going to throw it out there and see what he says.’ Yeah, he’s the best boss you could ask for.”

A ROUGH DAY: Logan Schuchart was one of the favorites coming into the 38th and 37th annual Kings Royal weekend at Eldora Speedway.

In the daytime show, Schuchart was an early player positioning himself in the top five by the halfway point. Unfortunately for the Shark Racing ace, the rear end let go on the car, and he headed pit side on Lap 20.

The nightcap wasn’t much better. Schuchart was forced to start 21st after winning the B-Main, and he was looking for one of those charges through the field that fans have become used to at Eldora.

It was cut short on Lap 21. Schuchart got up to ninth before heading to the pits with a broken gear set. He settled for a 23rd-place finish.

GOOD TO BAD: Daryn Pittman put the Swindell SpeedLab on the podium in the daytime 38th annual Kings Royal extravaganza.

Things didn’t go as well in the evening session. Pittman went out for time trials and also had gear trouble, which dropped him to 51st out of 58 cars.

Pittman tried to dig out of the hole and made it to the B-Main. He finished 18th and failed to qualify for the 37th Kings Royal.

IT’S HISTORICAL: Eldora Speedway announced that it will bring back the Historical Big One during the 2022 season.

The Big One will be held on Thursday of Kings Royal weekend, making it a four-day show at the Ohio facility. It will pay $100,000 to the winner. Daryn Pittman won the last event in the series in 2003.

FIRST TIMERS: Travis Philo and Kyle Larson joined the list of drivers who made a Kings Royal A-Main. Philo made it through his heat race and finished 20th.

Larson stormed from ninth to win his first Kings Royal,  just like Tyler Courtney did in the 38th running of the race earlier in the day.