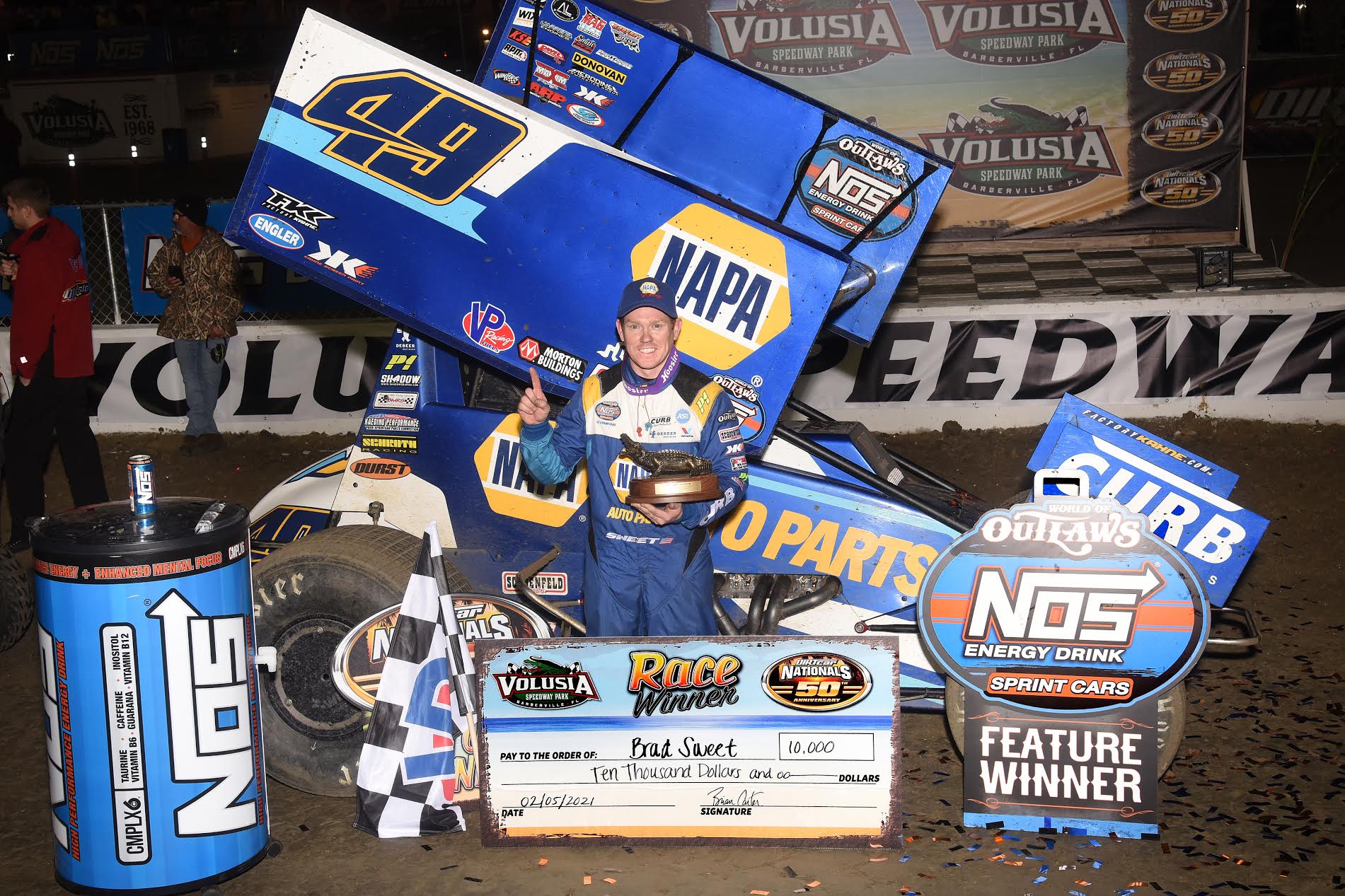 BARBERVILLE, Fla.: You could tell on Brad Sweet’s face that he wasn’t entirely happy with his results the last two nights at Volusia Speedway Park.

It’s not like Sweet was bad. He finished third both nights in the All Star Circuit of Champions main event, but it wasn’t the usual march to the front and contending for wins that he has been accustomed to at the Florida facility.

The difference is that those events were tune-ups. On Friday, the World of Outlaws NOS Energy Drink Sprint Car Series season kicked off, and Sweet was in mid-season championship form by the time the feature rolled around.

After that, it was all Sweet. The Kasey Kahne Racing ace chased down early leader Jacob Allen and was on point in traffic to claim his eighth career victory at Volusia Speedway Park and 59th in series competition with the Outlaws.

“I’m just really excited to start the season off with a win,” Sweet said after another DIRTCar Nationals triumph. “We know it doesn’t mean a whole lot when you win the first one. We’ve still got 89 to go, so we are focused on tomorrow.

“He [Logan Schuchart] has been good. You have him and the 15 [Donny Schatz] pop on the board, and I think the cream really rises to the top. I think we are going to have a heck of a battle between three or four of us this year, and I think it shows Night 1.

Sweet was brimming with it over the race distance. He looked like a guy who excels at Volusia and knows he has one of the best cars.

Jacob Allen grabbed the lead at the start, with Sam Hafertepe Jr. and Sweet in tow. Before the frontrunners could start dicing for position, Hunter Schuerenberg slowed at the exit of Turn 2.

Sweet and Schuchart took advantage of the restart and surged past Hafertepe. But by the time Lap 7 was scored, Sweet was a mere .413 seconds behind Allen.

The low line started to come in, and Sweet made the move to the bottom. He used it to stalk Allen and take the top spot away through the third and fourth corner on the ninth circuit.

Within two laps, Sweet had built an .854-second lead over the field. Schuchart was battling with his teammate and wrestled the runner-up spot away on the bottom of Turn 3.

Schuchart got a clear shot at the leader after Sheldon Haudenschild shredded a left-rear tire on Lap 12. The problem for Schuchart was that Sweet was too good on the bottom of the speedway and pulled out to a 1.104-second advantage at the halfway point.

“The racetrack was a lot more grueling tonight. It was high speed, and the bottom was really technical. You had to miss the hole in one and slow yourself down to get anything on exit. In four, you had to be really close to the inside wall, or it was really slick. It was tricky and a lot of fun.”

While Schuchart was trying to track down Sweet, David Gravel was battling with Allen for third. Donny Schatz was also storming through the field, advancing from his 18th-place starting spot to sixth by the time Lap 16 was on the board.

Schatz was a missile on the bottom. He made a two-car pass on Carson Macedo and Allen to take fourth on the 17th circuit and went after Gravel for third, taking that position on Lap 21.

It didn’t take long for Schatz to close on Schuchart. The two were switching lanes in lapped traffic, which hurt Schatz and allowed Schuchart to pull away a bit on Lap 22.

“We were decent,” Schatz said. “The Carquest Ford guys are pretty incredible. I don’t know that we were all that bad in qualifying. You weren’t going to turn a lap that good going out when we did. We just made the best of it.

“I felt like we had a chance there. We could see Brad and actually got to second, and I probably zigged when I should’ve zagged in lapped traffic or created a red to have a better chance. But that’s the way it goes some days.”

This was Sweet’s day. He led by 1.28 seconds on Lap 25 and maintained his pace to the checker, taking the victory by 1.128 seconds.

“I wasn’t sure where to be there, whether I needed to be on the top lane or the bottom lane,” Sweet said. “I was judging by the lapped cars, but sometimes they are hard to judge off. I was thinking about my tires, and I know the bottom is going to keep them cooler, but sometimes, the top gains speed here.

“So, I was just trying to search around as much as I could. I think I drove a really good race. I just made a few mistakes, but hats off to my guys.”

Schuchart settled for second and now has a win and two second-place runs in three events during this year’s DIRTCar Nationals. Schatz finished third, followed by Gravel and Thursday night All Star winner Carson Macedo.

“We were good, and I feel like we’ve been really good this whole week with our finishes,” Schuchart said. “These Drydene Performance Product guys are working really hard. It’s a lot of fun to drive,  that’s for sure.

“I don’t know if we had the speed we needed tonight. I felt like we could catch Brad, at times, but then just didn’t get by lapped cars like we needed to. I felt like I needed to stick the bottom in three and four a little bit better, but I really couldn’t. I could get three quarters across it, and the thing just wanted to push across the track.”

Continued Schuchart, “After the first two nights, I just really wished those were World of Outlaws point nights, but they weren’t. We started fresh today, and we were able to get a second-place finish. We always want to be in the winner’s circle, but we have two more nights and really like what we have going on.”