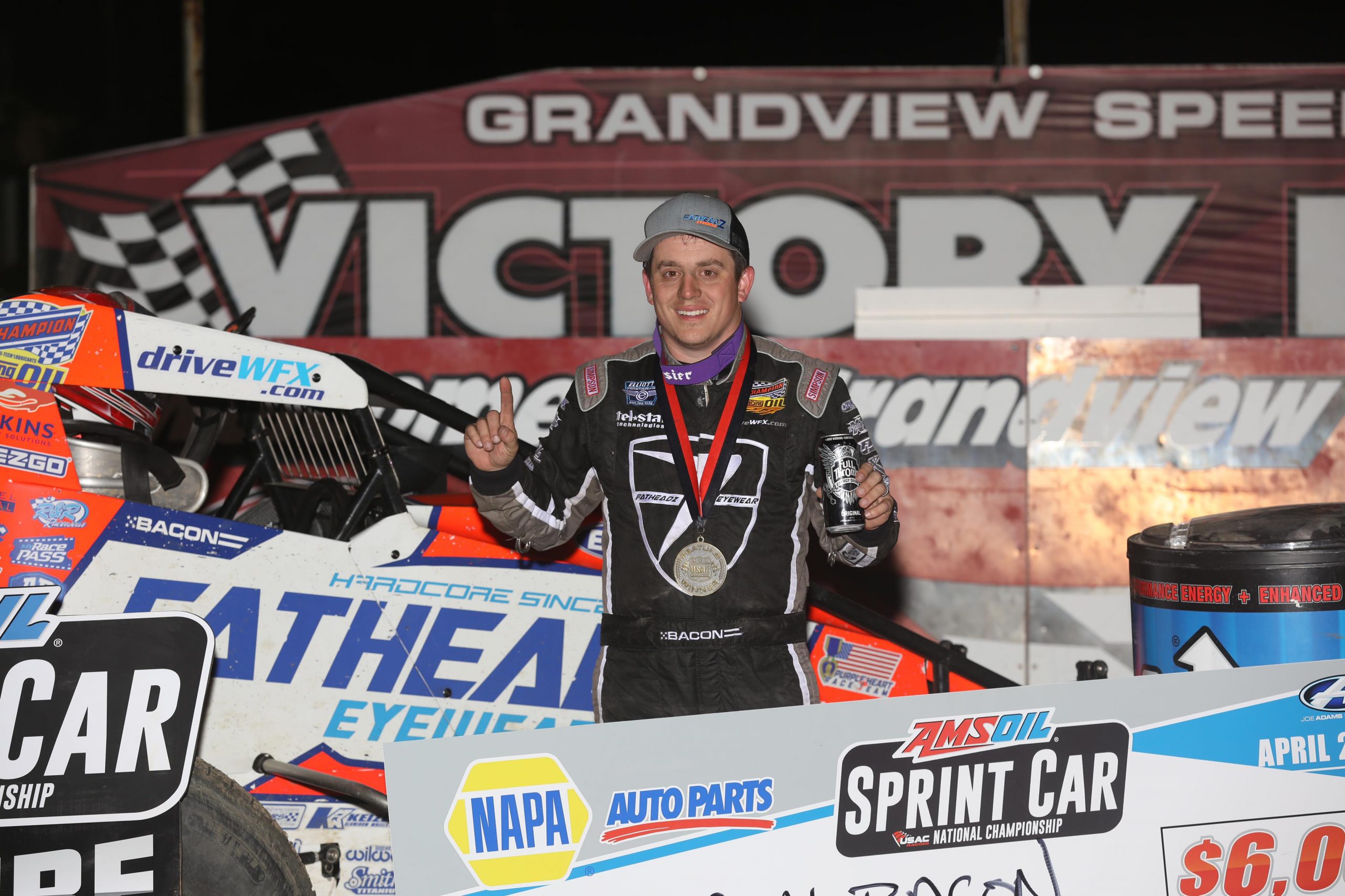 BECHTELSVILLE, Pa.: There was a time when Brady Bacon wasn’t as good at Grandview Speedway as he was at other tracks.

That time has passed. Looking at the USAC AMSOIL National Sprint Car schedule, the tricky Bechtelsville, Pa., facility might be one of his best.

Bacon was flawless over the 40-Lap main event Thursday night, taking the victory in a chilly opener to the Keystone Invasion. It was the Oklahoma driver’s fourth straight Grandview win in USAC competition.

“We just kind of got our slick-track program dialed in,” Bacon said in Victory Lane. “This is an odd-shaped track, and it makes it a lot easier when your car is handling good.

“Matt and Willie at FK … we keep working on our shock program, and DJ gives us a car we can depend on every night. Gene Franckowiak, this is the second or third time we have won with his engines. This is Zeus, one of his favorites.”

Continued Bacon, “It feels good to be back in Pennsylvania, and thanks to these fans for braving the cold. Hopefully, we can have a little bit better weather so we can have bigger crowds the rest of the week.”

Kevin Thomas Jr. started on the outside pole and took the lead at the start, ripping around the top of Turns 1 and 2. He opened up a 2.5-second lead over the field by Lap 5 and was on cruise control.

While Thomas was building his lead, Bacon was making his way to the front. He started third but fell back to fourth before taking third back on Lap 7. One lap later, he blew by Brandon Mattox on the low side of Turns 1 and 2 for second.

The first caution of the event came out on Lap 9. Chris Windom was running in the top 10, when he came to a stop at the bottom of Turn 2.

Bacon harassed Thomas on the restart, closing to within .140 seconds on Lap 11. The frontrunners broke away from the pack and caught the back of the field by the time the 18th circuit was complete.

Thomas led by .249 seconds on Lap 19. Three laps later, Bacon was able to diamond off the corner and shot under Thomas to take the lead by inches at the stripe.

“I knew if I could get to second, I knew there would probably be a yellow, and I wouldn’t have to worry about tracking him down in open track,” Bacon said. “I just kind of worked him over in lapped traffic.”

Bacon opened up a .533-second lead by the 23rd circuit. It looked like he was going to drive away from Thomas, that is until Steven Drevicki got upside down between Turns 3 and 4 to bring out the red flag on Lap 30.

This time, Bacon didn’t get away. Thomas closed to within .295 seconds on Lap 36, but that was as close as he would get.

Bacon led by .548 seconds at the white flag. Not much changed over the final lap, as the former champion took the win over Thomas by .814 seconds.

“I’ve just got to not make bonehead moves,” Thomas said. “I felt like I gave that one away. Me and Brady were pretty equal at the end, but to that point, not making the right moves in lapped cars was a mistake on my end.

“I just didn’t … I don’t know … it’s frustrating. I don’t really have words for it. The guys do a great job on the Dr. Pepper, McDonald’s 9K and gave me another great racecar, and I just have to do my job in the seat.”