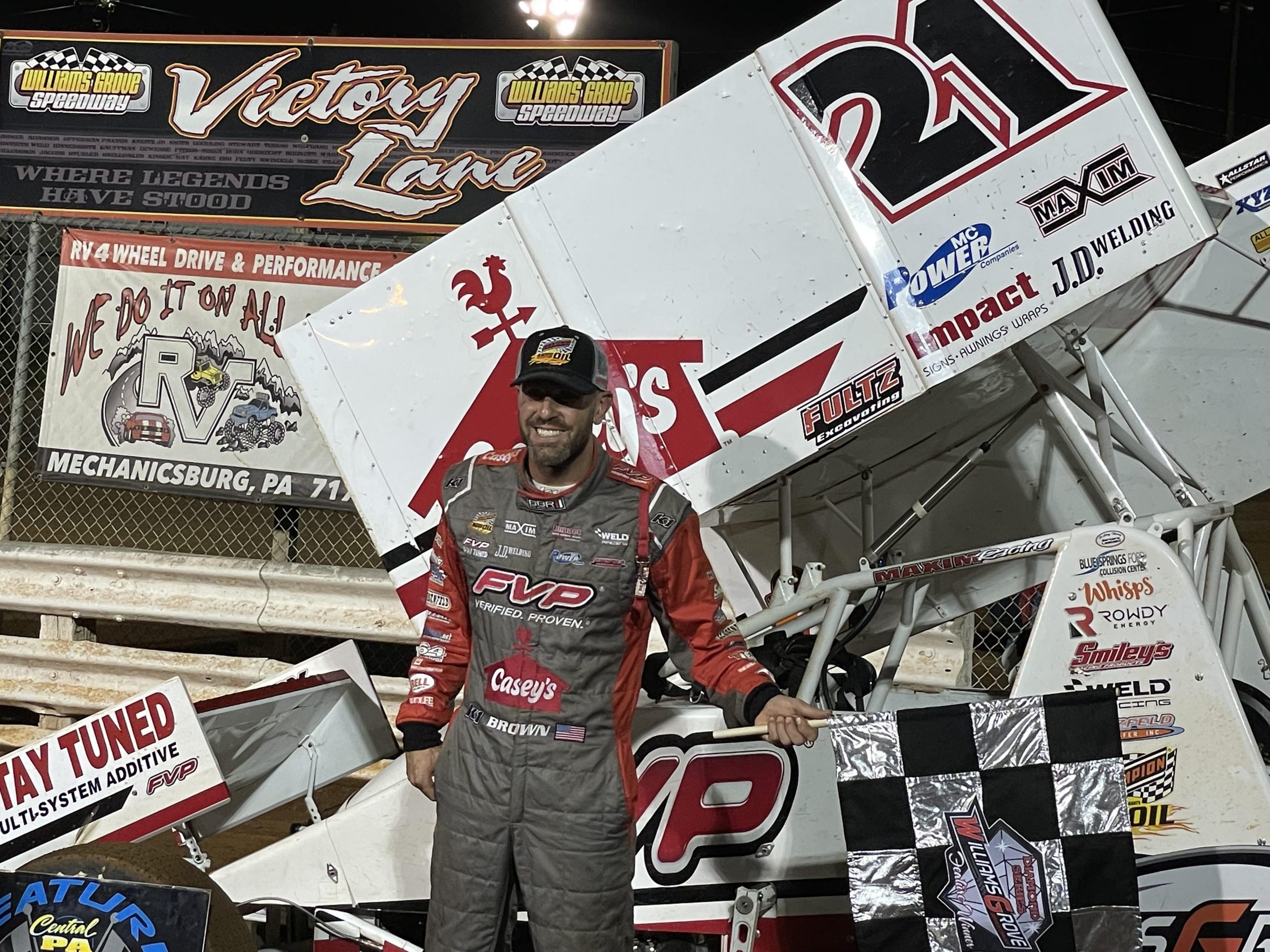 It’s all about the “Big 3” in this sport: Eldora Speedway, Knoxville Raceway, and Williams Grove Speedway in no particular order.

For Brown, winning at Knoxville has been no problem. It’s where he grew up. He’s also been close a time or two at Eldora, showing speed around the high-banked facility. As for Williams Grove, that’s been the most difficult of the three the Missouri driver.

That changed a bit Friday night. Brown showed improvement and got a little help when Brent Marks blew a motor, a combination that helped the Midwest standout lock up his first Williams Grove win in the 25-Lap World of Outlaws Tune-Up.

“When you start racing, you want to win every night, but there are three tracks that have been here since I was a kid with marquee events. That’s Knoxville, Eldora, and Williams Grove Speedway.

“To be able to win here … I mean, I don’t think I was the fastest car, but we did stay with Brent in traffic and were in striking distance, but he’s so hard to beat. This is an Outlaw Tune-Up, but these guys are Outlaw fast all year long. It’s a local race to everybody, but it means a lot to me and my team, and they can never take that checkered flag away.”

IN POSITION: Marks started on the pole after winning the Dash and wasted little time showing speed at the front of the field.

Brown, who started third on the grid, stalked Borden for second on the opening circuit. One lap later, he shot to the bottom of Turns 3 and 4 and came away with the runner-up spot before hitting the flagstand.

It was a critical move. Marks built a 3.087-second lead by Lap 5 and held a 2.210-second advantage in heavy lapped traffic by the time the 10th circuit was scored. Two laps later, Marks’ motor expired coming down the frontstretch, which put Brown at the front of the field on the Lap 12 restart.

NOT AN EASY WIN: It’s not like Brown drove away from his pursuers and put his name in the record books with ease.

Brown built a 1.124-second lead by Lap 15. He entered lapped traffic on Lap 20 and hopped the cushion in Turn 2 one lap later, which allowed Borden to close to within .361 seconds by the completion of Lap 21.

Borden got within striking distance going down the backstretch on Lap 22 and pulled a slider through the third and fourth corner to wrestle the lead away.

“That No. 0-car [Rick Lafferty], man, he’s a great driver, but I just have a tough time,” Brown said. “He’s not doing anything wrong; it just seems like I have a tough time getting around him even if I’m running fifth.

“He kind of runs my line, and I wasn’t quick enough to move to the bottom. It’s like I run in behind him, and I’ve got to be more aggressive because someone’s got to be coming. I got more aggressive and got up over the cushion.”

Continued Brown, “I tried to roll the bottom one corner and looked at the board and saw Devon there. He’s a good young racer and if you give him a track like this, he’s going to get up on the wheel. He made a good move, and at that point, I said, ‘Man, we’ve led to Lap 22, and I’m going to give this one away.”

THE WINNING MOVE: Borden held a slim lead at the stripe on the 22nd circuit, but it was short-lived with Brown stalking.

Brown pulled a nifty move through the first corner, scooting around the bottom and pulling in front of Borden in Turn 2. The Heffner Motorsports upstart tried to come back on the outside on the backstretch, but Brown moved him up and uncorked a slider through Turns 3 and 4 to stretch his lead by the completion of Lap 23.

“I just dug a little deeper and tried to find something,” Brown said. “I felt like when I had an opportunity to get by him, I just railed it into three and four wide open and slid [Lafferty]. I was either going to come out the other side with the lead or go up over the cushion and over the wall. That was my mindset at that point.”

Said Borden, “He just kind of pushed me up in no man’s land, but that’s kind of what he had to do. That was the race-winning move. I would’ve done the same thing to him. It’s racing. It sucks, but that’s how it goes.”

Brown had a little bit of a cushion and went on to score the win by .794 seconds. Borden held off Scelzi by a half-second to finish second.

LOCKE COMPLETES SWEEP: Derek Locke slipped past Tyler Brehm on Lap 13 and went on to score the victory in the 20-Lap 358 Sprint Car main event.

The win was Locke’s eighth of the season at the speedway and gave him a clean sweep in 358 Sprint Car competition for 2021 at Williams Grove. He has nine straight wins in the division dating back to last season.

“Two or three years ago, I couldn’t even make it to the Grove to race,” Locke said. “So, when the 360 deal went south at Selinsgrove, I needed to race. When they went to the big wings, it allowed us to run the same car in the 358s.

“We just found the right setup. Last year when we came here the first race, I told the guys, ‘This car is awesome here.’ Everywhere we take this car, it’s a top-three car.”

THEY SAID IT: “When I drove out of the gate last week, I told myself, ‘I’m not coming back here the same way for the feature next week, because I’m tired of starting third and running fifth or starting fourth and running sixth. I feel like I’m just blocking and holding on, but I feel like we gained on it tonight. Danny, Nate, my Dad, Ben, those guys do a phenomenal job. It’s just an awesome feeling to win a race at Williams Grove.” — Brian Brown on the thrill of winning at Williams Grove Speedway.

“Second does suck, but we put a full night together. We time trialed, got through our heat race, through the Dash, and put ourselves in position to win. That’s been our biggest struggle lately. Being in the Dash is what it takes to win races these days. You’ve got to be in the first few rows, and tonight we did that, battled for the lead, and as long as you can do that consistently, the wins will come.” — Devon Borden on his second-place finish.