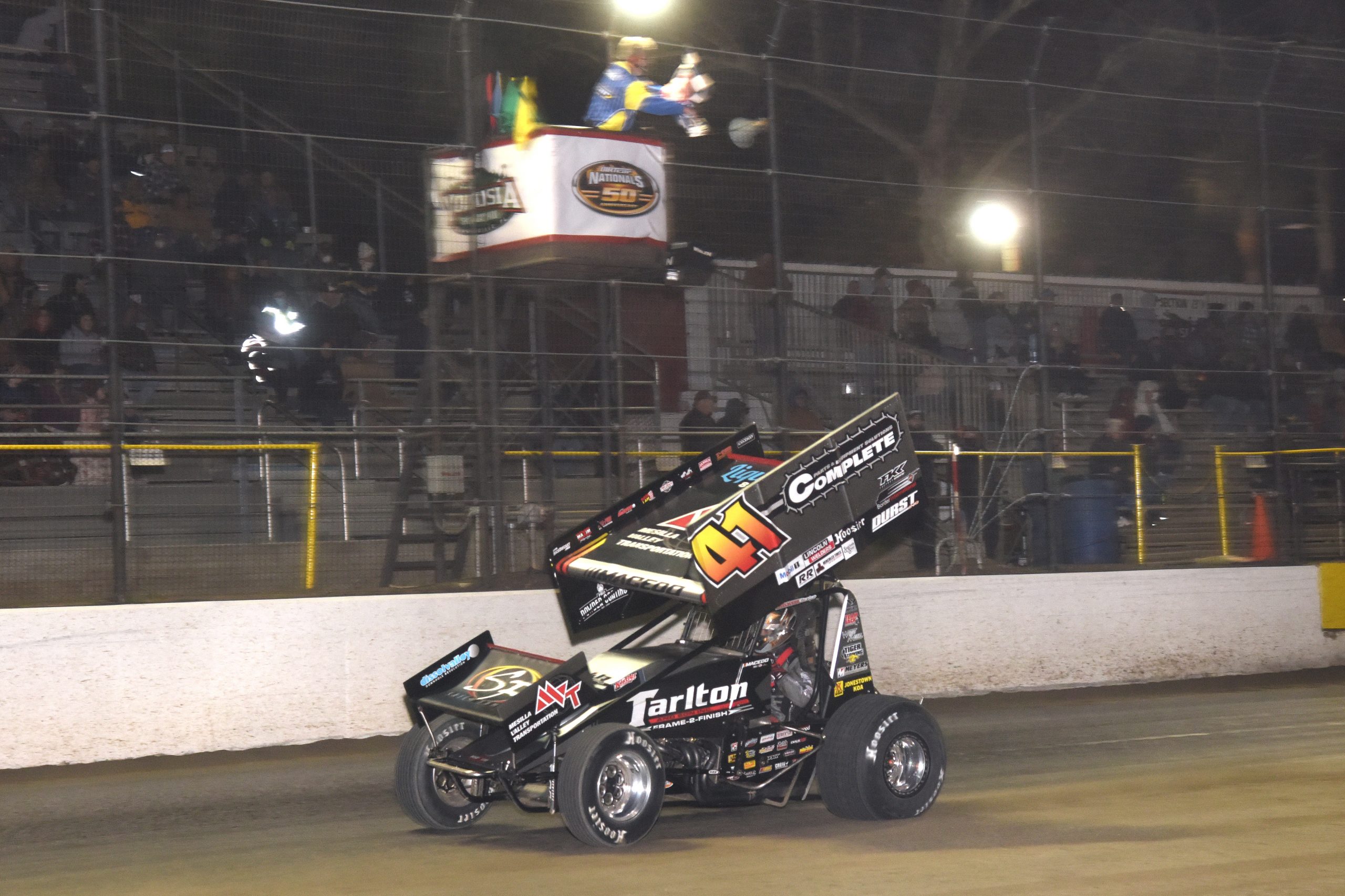 BARBERVILLE, Fla.: A new driver and crew chief combination usually has to go through a growing period to jell and find  a winning chemistry.

That isn’t the case with Carson Macedo and Jason Johnson Racing wrench Philip Dietz. Of course, it doesn’t hurt that the two worked together for a short stretch of events in 2018 after the death of Jason Johnson.

The combination of Macedo and Dietz had speed then, and they have it now. If there was any doubt, it was erased Thursday night at Volusia Speedway Park.

Macedo started on the outside pole and wired the field, holding off Wednesday winner Logan Schuchart to capture Night 2 of the DIRTCar Nationals, which featured the All Star Circuit of Champions.

“I can’t say how incredibly grateful I am to be a part of this 41 team,” Macedo said after the $6,000 victory. “This Jason Johnson Racing team is an amazing group of people. I had the privilege of driving this car in 2018 and had a lot of fun doing it. I’ve had a lot of fun the last couple of nights, and I’m really looking forward to the rest of the year.

“Philip Dietz, in my opinion, is the best mechanic out there. I’ve got two really good guys in Clyde Knipp and Nate Repetz, so I’m really, really happy with how our team is going now.”

This wasn’t going to be an easy march, especially with Brad Sweet starting on the pole. But Macedo made it happen early by getting the jump on the two-time defending World of Outlaws champion entering the first corner on Lap 1.

Macedo blasted around the top to take the lead. Schuchart, who started fourth on the grid, also got around Sweet and surged into the runner-up position.

The leaders started to encounter lapped traffic by the sixth circuit. Schuchart went one lane off the top and started to close on Macedo, pulling alongside the leader on the backstretch on Lap 11.

“I thought we were going to have a good shot at it,” Schuchart said. “We found the middle there a few times, and I tried it earlier in the race. I could get to his left rear, and he would get a run coming off the corner.

“It’s just tough. I thought lapped traffic would be in our favor when we got to him, and I thought I had the pass going down the backstretch but got cut off by a lapped car.”

Schuchart didn’t go away and was within .222 seconds as the 13th circuit was completed. One lap later, he was glued to the middle middle in Turns 3 and 4 and stuck, getting to the start/finish line one car-length off the pace.

But Macedo never wavered. He shot around the rim in Turns 1 and 2 and made tactical passes in lapped traffic to extend his advantage to 1.121 seconds by the time the 20th circuit was scored.

“Logan started showing his nose, and I knew I had to go,” Macedo said. “You know, early in the race, I was trying to bide my time. I was actually, for the first time in my life, trying to worry about my tires and just think a little methodically about what I was doing in the racecar … trying not make mistakes and force it in lapped traffic.

“The wall was really razor thin off two, and I didn’t want to risk throwing a big slider, running into it, and tearing up my racecar. But there late, I just kind of threw everything at it, started really running hard — as hard as I could — and making the lapped cars move as much as I could to make the gap between me and Logan.”

Macedo had plenty of tire left over the last five laps. Schuchart closed to within .590 seconds on Lap 22, but he never got a clear shot at the leader, who was tiptoeing around the cushion to perfection.

At the stripe, it was all Macedo up front. He took his first 2021 victory with Jason Johnson Racing by 1.817 seconds.

“Logan is one of the best, the 1s and also the 49-car [Sweet],” Macedo said. “To win this race and have them behind me means a lot, because I respect them both, and they are very good drivers.”

Schuchart settled for second, with Sweet trailing in third. David Gravel posted his second straight fourth-place finish of the week. Danny Dietrich completed the top five in the main event.

“It’s great to be back up here on the podium, to be able to have two good runs, two good nights, and feel real good starting the Outlaws [tomorrow],” Schuchart said.