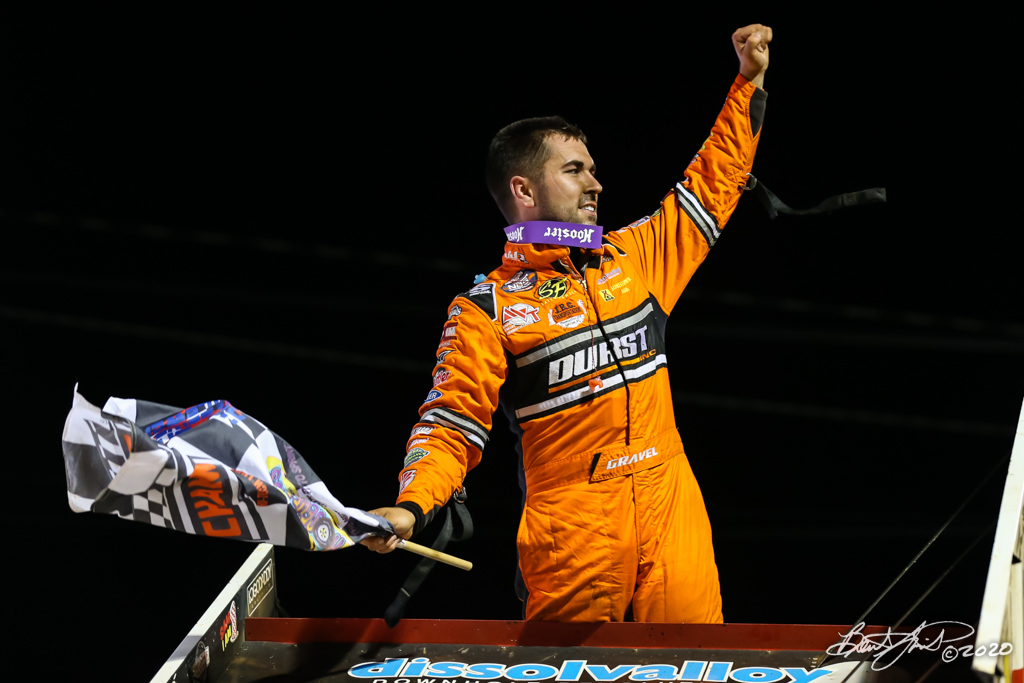 ABBOTTSTOWN, Pa.: David Gravel could have left central Pennsylvania and headed out to Ohio for the next World of Outlaws NOS Energy Drink Sprint Car series event.

That would’ve been the easy decision. The one that required less effort by the crew and less strain on the Jason Johnson Racing stable of equipment.

But Gravel and Co. are professional racers. They saw a nice first-place check at Lincoln Speedway and an opportunity to add to the bank account.

And they took advantage of it.

Gravel got the lead at the start of the Drydene 40 and held it over the race distance. The end result was his second straight victory and a $10,000 payday on the heels of a $20,000 Summer Nationals score Saturday night at Williams Grove Speedway.

“I’m just glad to get the win,” Gravel said. “We could’ve taken the rest of the week off, but it’s a short season, and I’m happy to get 10-grand. Thank you to Drydene for making this happen, and thank you to everybody for coming out.

“There has been a lot of racing in PA, and all you fans, we appreciate it. I just have to thank Phil, Clyde, and Nate, Cam, Braden, so many people. They make this thing go fast.”

This wasn’t the fastest laps Gravel has made in a Sprint Car main event, but they were effective, none the less.

Gravel started on the outside pole and beat pole-sitter Brian Montieth into Turn 1. His pace was slowed on Lap 3, when Adam Wilt slowed and wiped out a .847-second advantage by the leader.

Third-place starter Logan Schuchart took advantage of the restart and slid by Montieth for second. Before he could make a challenge for the lead, Billy Dietrich spun between the first and second corner on Lap 4.

Brent Marks started fifth on the grid and shot by Montieth to take third on the restart. Gravel remained out front, but Marks continued to chase Schuchart and started to challenge for the second position.

The front three moved from the top to the bottom groove looking for any grip they could find. Gravel maintained a slight lead heading into lapped traffic on the 13th circuit, while Marks made another bid for second.

Marks shot under Schuchart, who tried the top in Turns 1 and 2 on Lap 14, and the top three ran nose-to-tail one lap later. Marks and Schuchart traded the runner-up position on Lap 16, with the Myerstown ace holding the position.

By this time, Gravel was committed to the extreme bottom of the speedway as the rubber started to come in. Marks followed, but still wandered to the cushion occasionally when looking for a chance to get by.

Marks’ best shot came on the 33rd circuit. Gravel blew through Turns 3 and 4, and Marks stayed glued to the bottom and got beside the leader. Just past the flagstand, Gravel came down and chopped off the groove heading into Turn 1.

“We had all the opportunity in the world to win tonight, and luckily, we were able to capitalize,” Gravel said. “The track got real slick and cleaned off around the bottom, and I couldn’t get by a single lapped car unless they messed up.

Marks and Schuchart were able to get close to Gravel, but they didn’t have enough room to get by late in the race.

Despite some cord showing on the JJR No. 41, Gravel was able to hold on for his fourth win of the 2020 season. Marks, Schuchart, Lucas Wolfe, and Alan Krimes completed the top five.

“There is some cord showing,” Gravel said in Victory Lane. “You know, it’s a 40-lap race, and I figured that was going to happen.

“You had to conserve, and I heard Brent for a while behind me. I don’t know if he used his stuff up, and I was a little better at the end or what, but you just got to be patient. I did the best I could at being patient and not try to spin the tires.”