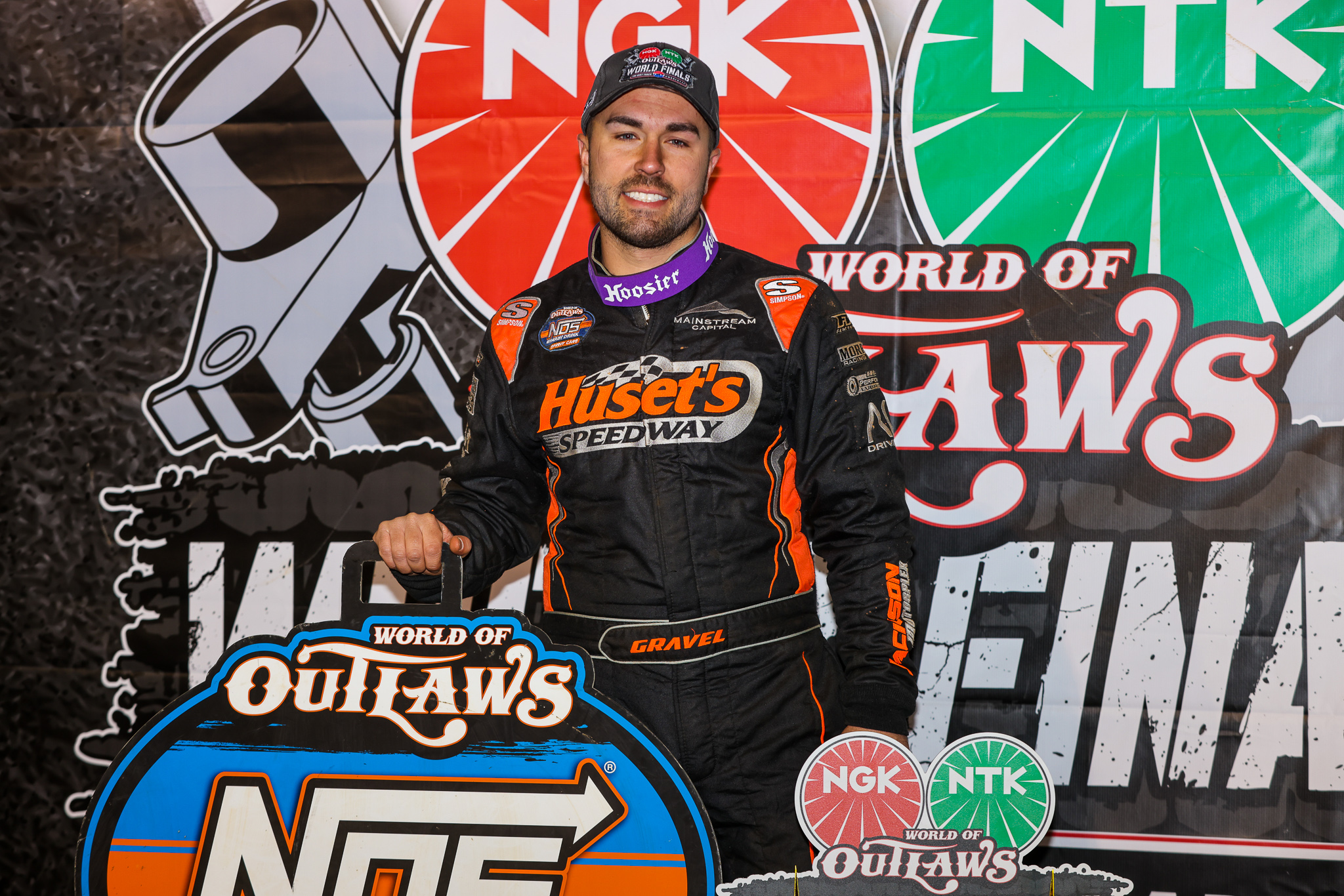 CONCORD, N.C.: It hasn’t been perfect, but David Gravel can’t complain about his first year with the Big Game Motorsports team.

Reaching double-digit wins with the World of Outlaws doesn’t hurt the cause. The same could be said for his second-place position in the series point standings.

But there was more work to do. And Gravel got it done Friday night, when he took advantage of Logan Schuchart’s misfortune to capture opening night of the NGK NTK World Finals as The Dirt Track at Charlotte.

“I have to thank all my guys,” Gravel said after his 11th World of Outlaws win of the season. “Scotty is sick at home; wish he could be here. I have Patrick who used to work with me and Trey. My crew chief, Cody [Jacobs], he’s done a good job. It’s his first year with the World of Outlaws as a crew chief, and that puts a lot of pressure on you.

“It’s been a pretty good first season, and I’m excited for the future with this team. I have to thank [owner] Tod Quiring, Luke Lundt, and everybody back home. It feels good to get the win.”

TURNING POINT: Logan Schuchart surged to the front, taking the top spot away from Kasey Kahne in Turns 3 and 4 on a Lap 2 restart.

The Shark Racing ace paced the field and built a 1.596-second lead by the 10th circuit. Five laps later, he increased his advantage to 1.627 seconds.

After Tyler Courtney brought out the caution on Lap 19, Schuchart slowed with a flat tire on the restart. That put Gravel out front and in position for the victory.

“It’s all just track position. I think if I got the lead on Logan, I don’t think he passes me. It’s about where you are at and being at the right place at the right time.”

BATTLE FOR THE WIN: With Schuchart out of the way, Gravel and Brian Brown were left to do battle for the prestigious win.

Brown took the lead from Gravel in the first corner after Schuchart slowed. Gravel ducked back under coming out of Turn 2. The two crossed each other over at the other end of the speedway, with Gravel holding the lead.

Gravel, finally, pulled away from Brown, stretching his lead to 1.040 seconds by the 25th circuit. At the finish, he took the win over the hard-charging Kerry Madsen, who passed Brown for second in the last corner.

“Brown kept throwing sliders on me,” Gravel said. “I was running as hard as I could trying to clear him and was finally able to.

“I knew I had to run a torrid pace those last 12 laps. I got to lapped traffic with seven to go, and I was like, ‘Man, I have to try something here.’ It started cleaning up off the cushion, almost like taking rubber. So, I just moved down, and it worked out.”

BY THE NUMBERS: We mentioned earlier that it was Gravel’s 11th win of the season, but it was also his fourth in his last five World Finals events.

For Gravel, who now has 69 World of Outlaws wins, it was the third different team he’s been victorious with during World Finals competition. He won with CJB Motorsports, Jason Johnson Racing, and Big Game Motorsports.