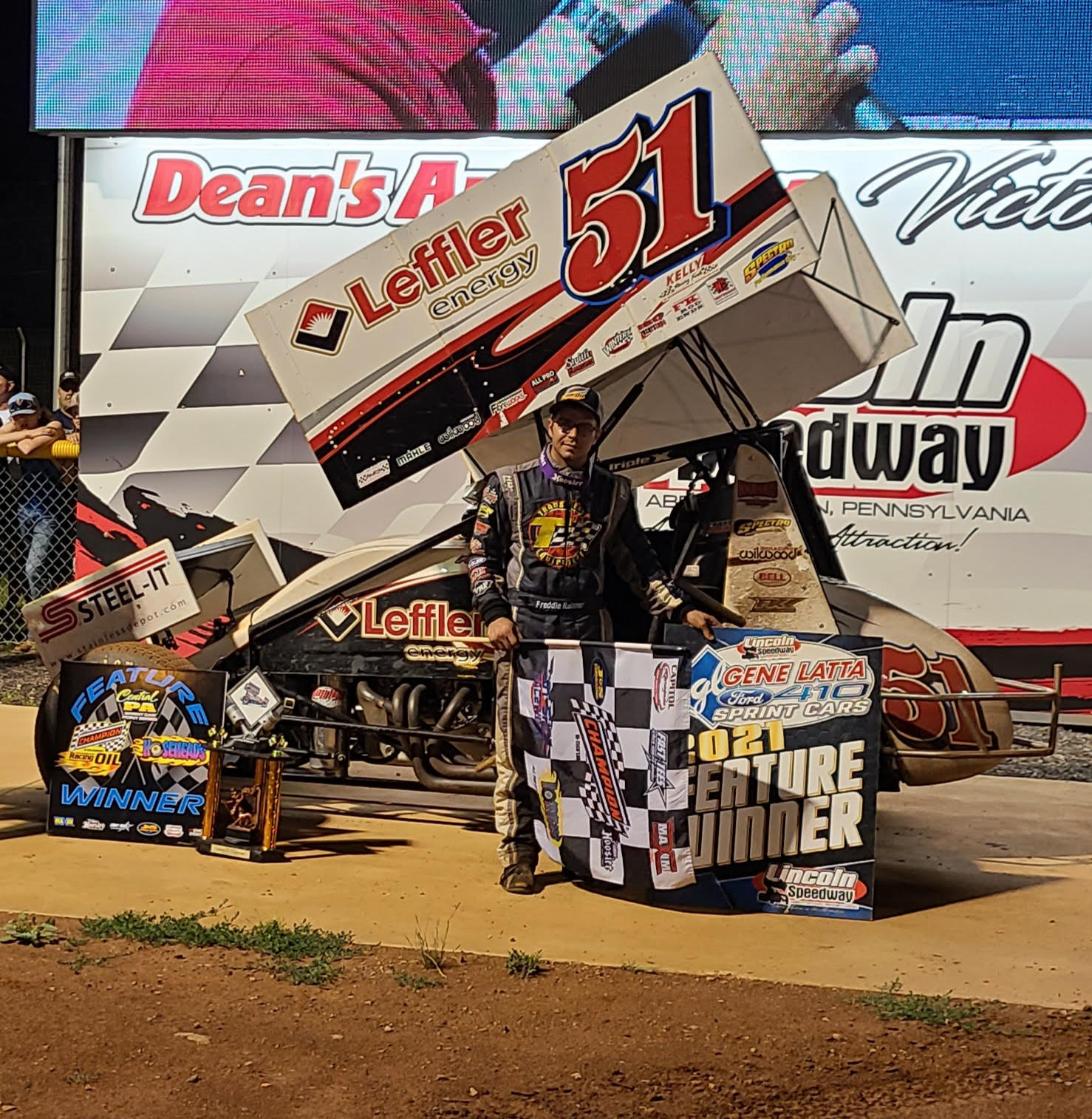 ABBOTTSTOWN, Pa.: Freddie Rahmer’s had his share of success against the competition at Lincoln Speedway.

Not only is he the defending track champion at the Saturday night track, it’s where he’s beaten the World of Outlaws and won other big events.

The Salfordville, Pa., ace did it again this week. He stormed from eighth to the front to capture the 33-Lap Fallen Fire Fighters Night in Memory of Brandon Little event at the Abbottstown oval.

“We got lucky in the heat race and got to start eighth,” Rahmer said after the $5,000 triumph. “We were decent most of the race, but after the yellow, I don’t think I was good the last three laps.

“It’s pretty cool [to win]. This is our third one of these, and they do a heck of a job promoting it. The place was packed when we got here, so it’s just cool to win again.”

Tim Wagaman got the jump on Alan Krimes at the start of the main event and cruised around the cushion. Tim Wagaman Jr. settled into third, with T.J. Stutts, who was making his first start in the Michael Barshinger machine, taking fourth.

Rahmer methodically made his way to the front. He entered the top five on Lap 6 and blasted his way into fourth by passing Stutts one lap later.

Krimes continued to nail the bottom and was able to close on the leader by Lap 10. The former track champion made it stick on the 11th circuit, taking the lead from Wagaman through Turns 1 and 2.

Meanwhile, Rahmer was showing speed in his march to the front. He took third on Lap 11 and slipped under Wagaman for the runner-up spot through the third and fourth corner on the 13th circuit.

It didn’t take long for Rahmer to track down the leader. He was less than a car-length back at the completion of Lap 17 and surged around Krimes for the lead on the outside of Turn 2 one lap later.

“With the rain this week, the track was heavier and had a big curb,” Rahmer said. “I didn’t want to jump it and lose the race, because we were in contention with Alan and Wagaman.

“It just worked out. There is room for me to improve, but I will keep after it. This isn’t our last race, and I’m just looking forward to Speedweek.”

Rahmer built a one-second lead, but lapped traffic was cumbersome and allowed Krimes to make up a little ground. Still, a caution was needed for there to be a challenge for the top spot.

Krimes was within .945 seconds on Lap 30. One lap later, Troy Wagaman Jr. slowed through the second corner and gave him one more shot at the leader.

It wasn’t enough. Rahmer was up to task over the final three circuits and scored his third win of the season at Lincoln Speedway and fourth overall.

“We just got to keep fighting and getting in position to win,” Rahmer said. “When these time trial races come around, you’ve got to take advantage, because we come every week to support [Lincoln] and start ninth or 10th in the heat. It fell into place tonight, and we got in position to win.”