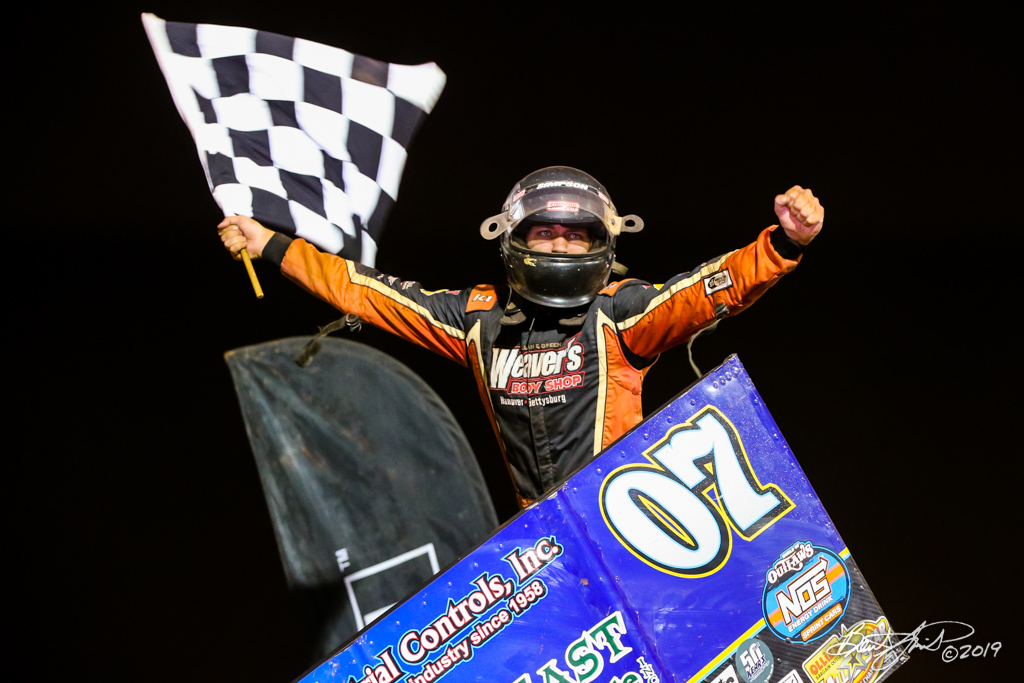 It’s been a campaign full of missed opportunities and disappointment. McIntyre has been in position to win multiple shows but hasn’t cashed in on the nights he’s run well. Then, there have been events where the car hasn’t performed, or he’s been caught up in an on-track incident.

A change was imperative. McIntyre needed one good show to turn things around, and he might have gotten it at BAPS Motor Speedway Sunday night.

McIntyre had some adversity but managed to overcome it to hold off Dale Blaney for the victory in the 30-lap Justin Snyder “Salute to the Troops” race at the York Haven, Pa. oval. The win was McIntyre’s first of the season with the series and put $5,000 in the bank account.

“So many ups and downs this season,” McIntyre said. “There are some good races, and when they are good, they are really good. When there are bad …

“We should’ve won Orange County and got into the wall and gave that one away to Danny [Dietrich]. Lincoln, last night, was a mess. We just couldn’t put anything together at Williams Grove, and we got into the wall at Grandview. It’s just one thing after another.

“Basically, it’s about winning races. We’ve got to figure out a way to do it more often. This is a good start. We go to Ohio again, and I need to put together a successful week there and then come back to Pennsylvania. We are just looking to finish off the All Star year strong and see where it goes.” 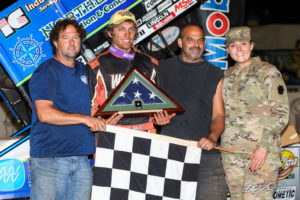 The event was marred by a wild incident at the start. Pole-sitter Justin Peck and Cory Eliason made contact entering Turn 1, which sent Peck into the outside fence. Fuel poured out of the fuel cell and ran across the track, forcing a red flag.

Before the race went back to green, Dietrich came storming across the track. Others went back to the pit area and voiced their displeasure. Some fans were disgusted with the decision and left the facility.

“It was kind of comical, especially when the first three got disqualified,” said Dale Blaney, who finished second in the main event. “Then to come back and say the 69K, it was like, ‘Are you freaking serious?’

“You want to race the best guys, and you want to race against Dietrich, Macri, and Lance and see what you’ve got. I feel bad for those guys. It was a bad situation.”

Said McIntyre, “I was a little surprised by it, but rules are rules. They disqualified Kyle Larson [earlier this year], and let’s be real, nobody who got disqualified tonight fills the shoes of Kyle Larson. It is what it is.”

When the race went back to green, McIntyre got under Eliason, who had significant sideboard damage from the incident with Peck. Blaney fell into line in third.

Blaney showed speed throughout the main event. He pulled even with Eliason to complete the fourth circuit and slipped to the inside for second coming out of Turn 2 on Lap 5.

The second caution of the event came out at the completion of Lap 8. George Hobaugh and Dan Shetler were involved in an incident in Turns 1 and 2, which put Blaney on the rear nerf bar of McIntyre heading back to green on Lap 9.

Blaney closed to within .131 seconds on Lap 11. The two drivers made slight contact in Turn 1, and Blaney washed up the track to save his car. He rebounded two laps later and slid through the middle of the first and second corner to pull even with the leader going down the backstretch.

But, McIntyre didn’t give. Blaney showed his nose again on Lap 16, and the former Pennsylvania Posse driver buzzed around the top of Turn 2 to hold the position.

Fans and drivers got a chance to catch their breath on Lap 19, when Aaron Reutzel, who was running third, flipped in  Turns 1 and 2. He was OK.

Freddie Rahmer, who started 19th, entered the picture on the restart. He restarted fifth and nailed the bottom to take third away from Eliason. The Salfordville ace closed on the leaders and made it known that he was going to contend for the win.

“I heard him there,” McIntyre said of Blaney. “He was in the middle, and I kind of moved up and changed my entry into one and two.

“I started entering lower and couldn’t carry any speed. I was just trying to find something and change it up so they couldn’t get around me. A couple of times, I heard Dale up there, and I went to the top. He got underneath me, just like Freddie at the end.

“I was riding around the bottom and saw Freddie beside me a couple of times. At that point in the race, I couldn’t get off the bottom. I had my wing so far back to get drive and with the front wing knocked sideways, it just got my front end so light on the straightaway. I knew those guys were there, so I just had to hang on.”

The final caution came out on Lap 22, when Jeff Halligan stopped in Turns 1 and 2. Blaney threw everything he had at McIntyre the final eight circuits, but he couldn’t pull off the winning move.

McIntyre fought off one last charge coming to the white flag. Blaney showed the nose in the corners, but he didn’t have enough to muscle by.

“I just couldn’t clear him,” Blaney said. “He was good enough off the bottom of four. I got a few good runs on him in one and two, and I think if I clear him, I drive away. I just didn’t freaking clear him.”

McIntyre took the win by .184 seconds at the finish, earning his first All Star win of the season. Blaney finished second, followed by Rahmer, Brock Zearfoss, and Paul McMahan.

“Last night, it was crash after crash, and that’s how it started here in the feature when they got together on the start,” McIntyre said. “That’s what knocked the wing off, and I thought it was just going to be another one of those nights.

“I drove around Eliason and rode around in clean air. The cautions came out at the right time, I didn’t have a left-rear bleeder, so it’s really one of those things where everything went right tonight. You need to have that to get these things to Victory Lane. It’s so tough in Pennsylvania, and then to add the All Stars deal to it, it’s just great to be here.”

Ken Duke Jr. dominated the PASS/IMCA 305 Sprint Car feature. He started on the outside pole and led the entire race distance for his eighth win of the season.