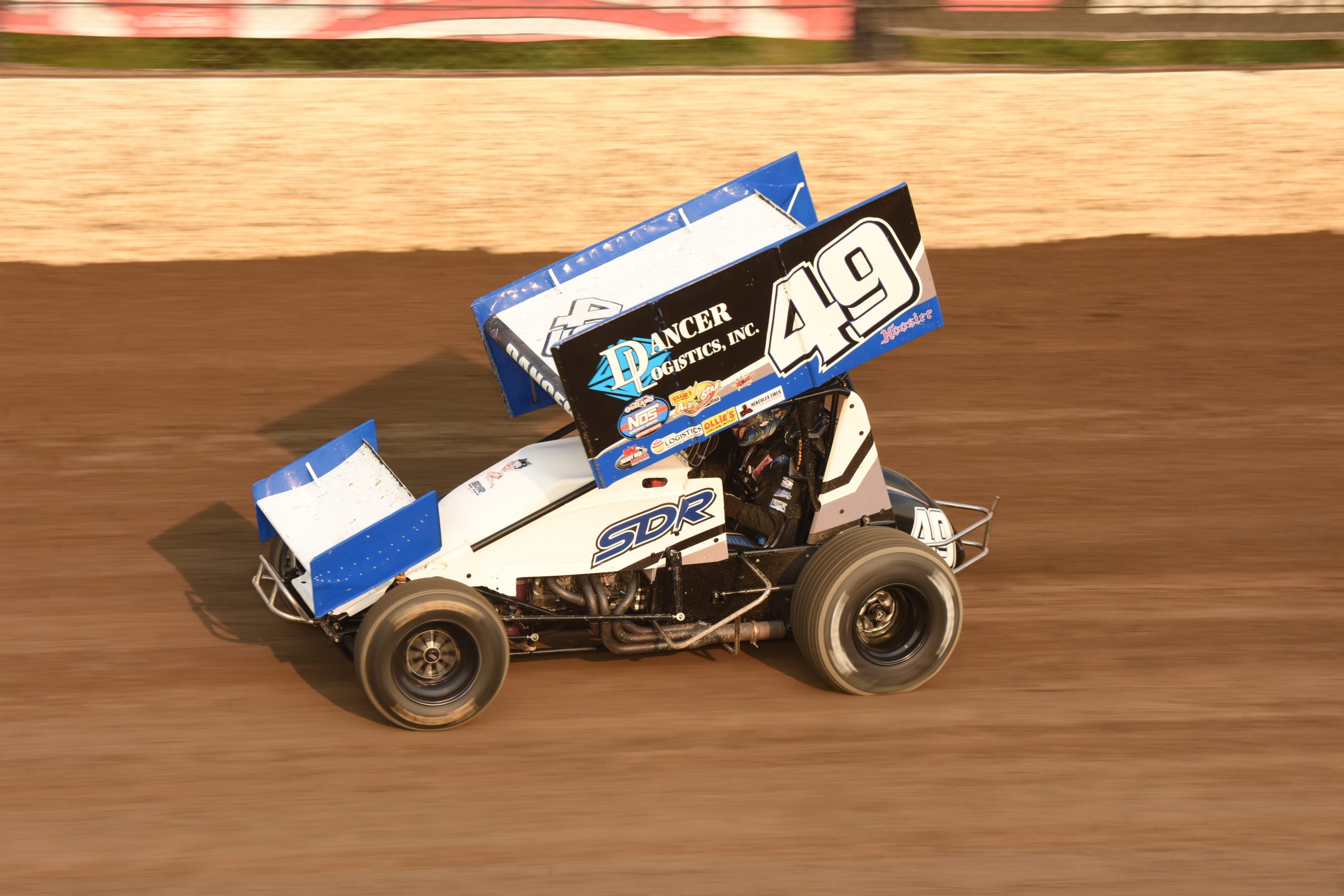 ROSSBURG, OH: Shawn Dancer doesn’t have a big racing budget and hasn’t reached the point in his career where he is a household name.

People have a tendency to focus on the professional teams that have a premier driver and big-name sponsors. As for Dancer, he has a small operation that usually flies under the radar during an event such as the Kings Royal.

That changed a bit Saturday afternoon at Eldora Speedway. For the first time in Dancer’s career, he made the Kings Royal A-Main … a pretty good accomplishment for a driver who has only run a 410 Sprint Car five times in 2021.

“It’s a pretty good feat,” Dancer, 42, said. “The Kings Royal, Earl [Baltes] set it up to help the less fortunate out. So, the way the format is, it did just that. We were in position to be able to draw the pill we did, qualify where we did, and start in the front row of our heat race.

Continued Dancer, “These teams put hours and hours in their stuff and run 90 races. They probably have 50 races under their belt [this season], and this is our fifth in a 410 this year. So, to be able to do what we did, I think it means something.”

The Delphos, OH, driver lined up on the pole of his heat race after a four was pulled for the heat-race inversion. Tyler Courtney stormed from fourth to the lead in a hurry, and Dancer dropped back to third.

But this wasn’t as simple as Dancer taking advantage of a daytime surface. He had to fight off former Kings Royal champion Joey Saldana over the last five laps to hold the last qualifying spot.

“During the heat race, it was on my mind about the start,” Dancer said. “I thought the track would be a little heavier. They didn’t touch it from the other night, so it slicked off pretty quick, and that kind of ruined my whole thought process on how to start the race.

“Tyler got in there and slid us. I left the bottom open for him, which was my fault, and we settled into third. I saw Joey once, and I said, ‘Dancer, this is the Kings Royal, and you better step on it.’

“We did, and the car was the best car I’ve had. I was relaxed up there [on the cushion], and I could’ve driven 50 more laps like that.”

Luckily, Dancer didn’t have to and qualified for the 40-Lap main event. He started 16th on the grid and came away with a 19th-place finish.

Tyler Courtney grabbed the headlines for winning $175,000 and should be the main story. David Gravel was light at the scales after finishing second, which bumped Pennsylvania Posse member up to the runner-up finish. Those will be the storylines fans will focus on heading into the week.

As for Dancer, his march will likely be overlooked by many. That’s fine for this humble competitor. He is just having fun.

“I don’t get into the glamour or excitement,” Dancer said. “I’ve made Outlaw shows before, but Eldora is a cool place, and this is the first time we’ve made an Outlaw show here. So to be the first one at Eldora and have it be in the Kings Royal, it’s awesome.”

DRAMA AT THE SCALES: David Gravel was pressuring Tyler Courtney for the win in the 38th annual Kings Royal at Eldora Speedway over the last two laps.

But even if Gravel did pass Courtney for the win, it wouldn’t have mattered. When the Big Game Motorsports car rolled across the scales, it registered 1,422, which is three pounds light, according to the new 1,425-pound weight rule instituted this season.

Courtney was next across the scales and made it by a mere three pounds. Third-place Danny Dietrich was in no jeopardy of being light, weighing in at 1,474 pounds.

“Freak thing, we usually have plenty of fuel after the A-Main, but we didn’t today,” said Gravel, who indicated his car only had two gallons of fuel left. “I don’t why.

“We were good. I think before the rubber, we were just as good as anybody and had a good racecar. It just takes a lot of effort to put yourself in position.

“So, we will try and qualify good [in the second Kings Royal], and it’s all about the spinning of the wheel. If the wheel goes our way, great. If it doesn’t, we will have to work harder in the heat race.”

MORE MISFORTUNE: This might be one of Kyle Larson’s worst stretches in a Sprint Car since making it to the NASCAR ranks.

Larson had trouble at Attica Raceway Park Tuesday before having a torque tube break during heat races for Wednesday night’s Joker’s Wild. He did manage to come back and finish 10th in the main event.

On Saturday afternoon, Larson put himself behind when he finished fifth in his heat race after starting third. That put him in the B-Main, where he flipped entering Turn 1 after collecting the fence.

WINNING FOR BRYAN: Tyler Courtney was peppered by a variety of questions at the post-race presser, and it only made sense that the late Bryan Clauson came up in the discussion.

Clauson was a versatile driver who competed in USAC Midgets and Sprint Cars and was making the transition to the winged ranks before being involved in a fatal crash during the Belleville Midget Nationals in 2016.

“I think he would be pretty dang happy,” Courtney said “I think he would probably be in the same situation as a driver. I think he was just coming into his own on the wing side of things, but all of this is in honor of him.

“Hopefully, the least we are doing is making him proud and representing him the way he wants to be represented.”

MORE FIRST TIMERS: We mentioned Shawn Dancer qualifying for his first Kings Royal A-Main, but he wasn’t the only driver to hit that achievement.

Including Dancer, who made it in his try at Eldora Speedway, five of the 24 main event starters were first timers.

Tyler Courtney was the class of this group, when he pocketed $175,000 for the victory. Danny Dietrich also qualified for the first time and finished second after David Gravel was disqualified.

Spencer Bayston came through the B-Main and was up to fifth when he started to run out of fuel. He finished 13th. Australian Lachlan McHugh visited the Kings Royal for the first time and came away with an impressive 17th-place finish in the main event.