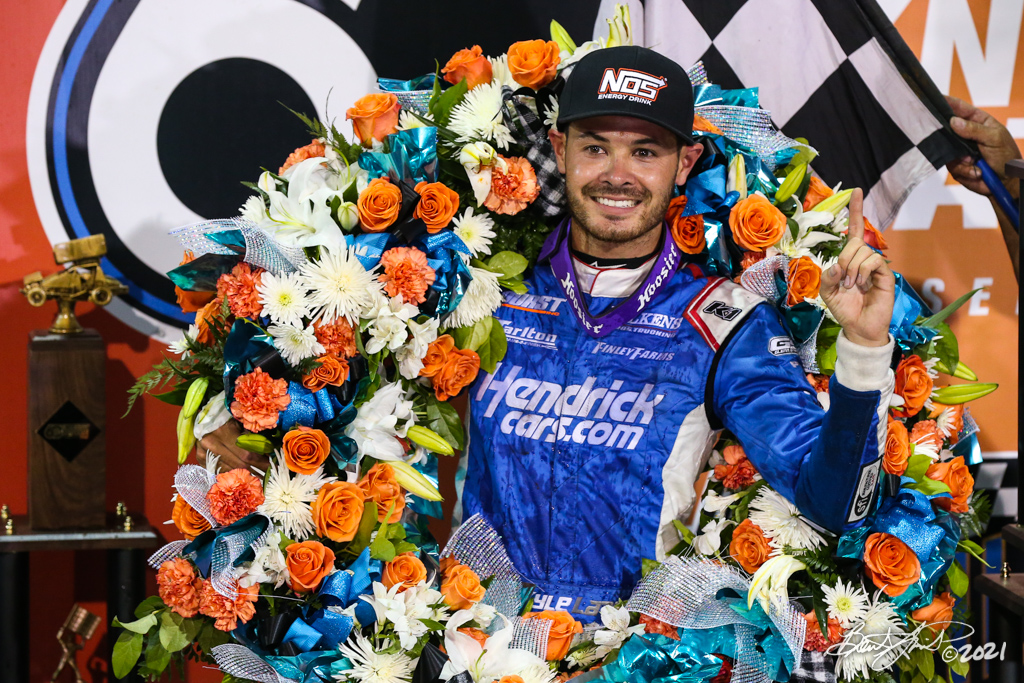 It’s hard not to get mesmerized by Kyle Larson’s ability behind the wheel of a race car. Stock car, Sprint Car, Late Model, Midget, horse and buggy … as a driver, there are few who can match his overall talent.

That’s part of the fascination. When he rolls into the pit area, regardless of the track or the division, he has a chance to win. Fans, media, and even other drivers can’t wait to see what he is going to do next.

In 44 years of watching racing and covering the sport for different publications, I don’t think I’ve ever seen another driver captivate a crowd or the sport to this degree.

Larson is the perfect combination of generational talent, luck, and resources-opportunity. It’s the same sort of mix I see with Tom Brady and other athletes at the top of their field. I’m just not ready to say the California driver is the best of all time.

Unfortunately for Larson, he has already been ordained as the best all-around driver ever by the social media mob. Fans and those within the sport can’t wait to heap praise on his exploits and seem to have no memory of past greats.

In fairness, that’s easy to do. It’s hard not to be wowed by his accomplishments at the local dirt track on a Friday or Saturday night and then see him win a NASCAR championship.

Larson’s accomplishments this season only solidified any notions of supremacy. He checked all the boxes, winning the Kings Royal and Knoxville Nationals in a Sprint Car, earning Late Model and Midget victories, and capping 2021 with a NASCAR title.

It’s not that I’m not impressed or don’t respect Larson’s ability. My hesitation to bestow the crown on his head and place him above all others in the halls of history is because of that respect and the appreciation I have for those who came before him.

A.J. Foyt is the first to come to mind. The gruff Texan ripped off 23 USAC Sprint Car wins in his career and had victories in a Midget, Silver Crown, and Champ Car during the series’ heyday and has 138 total wins under the USAC banner.

As good as Foyt was on dirt, he was better on asphalt racing’s biggest stage. He won the Indianapolis 500 four times and had seven NASCAR Cup wins, including the sport’s crown jewel … the Daytona 500.

Still not a believer? Foyt is the only driver to win the Indianapolis 500, the Daytona 500, 24 Hours of Daytona (twice), the 24 Hours of Le Mans, and 12 Hours of Sebring. The Australian Speedcar Grand Prix is also on his hit list.

Foyt had some advantages over Larson. The biggest of which is that he didn’t have the eyes of the world glued to his every move and then have it broke down at nauseam on social media. That’s enough to derail any athlete.

Imagine what it’s like being Larson. The pressure to live up to all the hype can weigh heavy. Not that he can’t duplicate his performance from previous years, but when you are at the top, there is only one place to go.

That’s not to say he will crack or even thinks about not living up to expectations. We won’t know that until it happens, because right now, things are all good and he is riding his wave of success.

Other drivers have been in that situation. The difference is dealing with the microscope of social media — Twitter, Facebook, Instagram — and the scrutiny that can be around the corner when athletes slip even a little bit.

I think Larson has an inner circle that can offset such nonsense. He has a strong, close-knit family, and Hendrick Motorsports can provide the type of support needed in such situations.

Larson has already shown that he can bounce back from adversity. I don’t know if there is another NASCAR driver in the garage who gets a second chance after dropping the N-Bomb on iRacing, much less get a better ride and put together the numbers he did in 2021.

The difference with Larson is that he is likable in the eyes of fans. He has a flashy smile, boyish looks, and a pleasant demeanor. His talent can be breathtaking and his passion unmatched … the perfect combination for success.

Will Larson be the best all-around driver ever by the time his career comes to a close? I’m not going to bet against him. Watching him the last few years, it seems like a matter of time.

But at 29 years old, Larson still has more work to do. In the meantime, I’m going to sit back and enjoy what should be an entertaining ride.