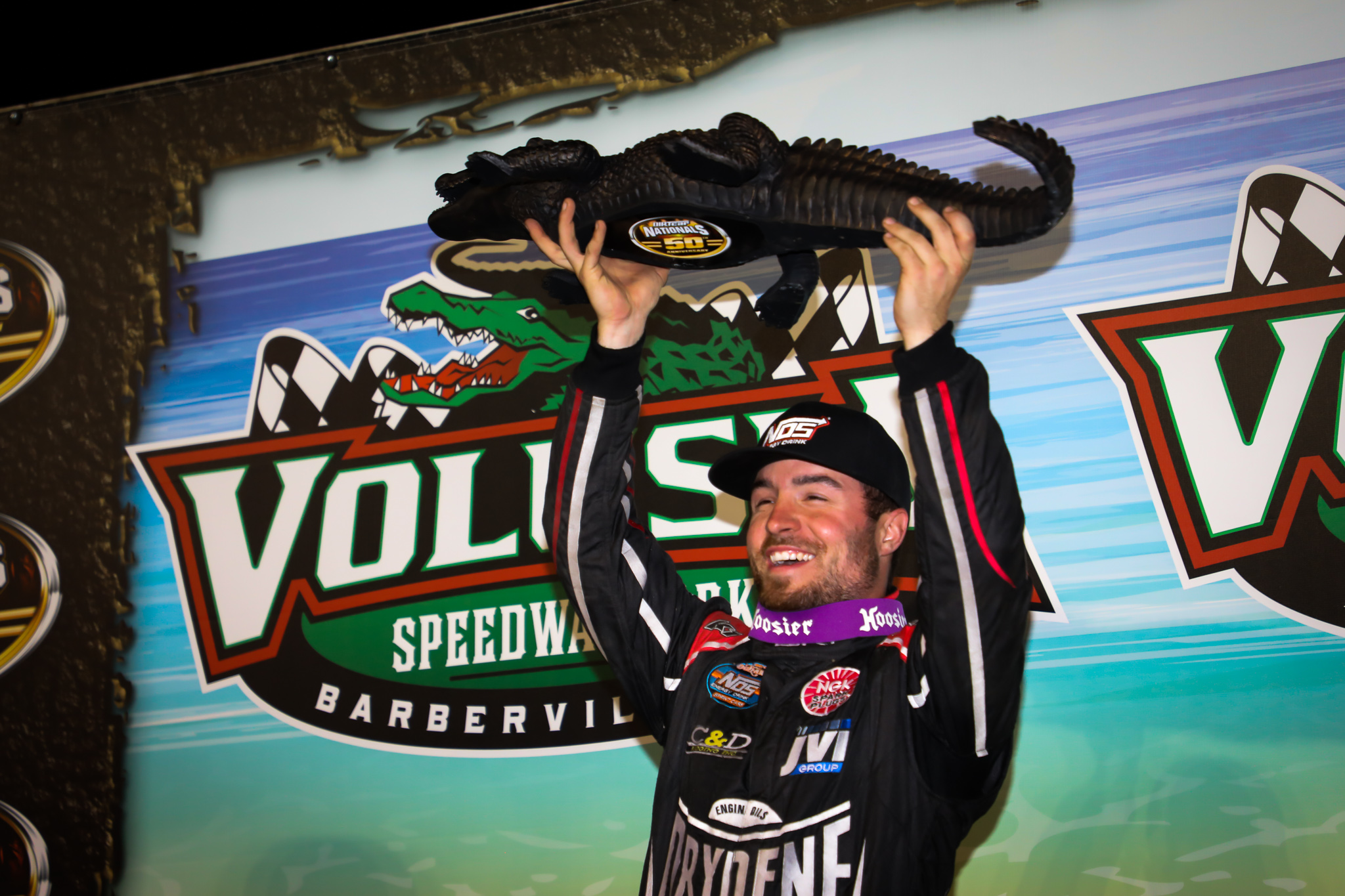 BARBERVILLE, Fla.: It looked like Logan Schuchart was headed for another solid finish to cap his march to the DIRTCar Nationals Big Gator.

The trophy goes to the driver who accumulates the most points over the five-night series, which was cut to four because of Saturday’s rainout. Schuchart was running second, two seconds behind leader Donny Schatz and had enough to lock up the overall crown with two laps remaining.

This is when things usually go wrong for the high point guy. Not in this case. Instead, Schuchart got the icing on his DIRTCar Nationals cake.

Schatz was headed toward his 300th career World of Outlaws victory and a worthy celebration. That all changed on Lap 29, when he slowed on the track. Schuchart assumed the lead and went on to collect the victory in the 30-Lap main event.

“You don’t want to see that happen,” Schuchart said. “You want to win it the right way, but that’s part of the game. We’ve been in that position, too.

“Michael Newman builds us great racing engines. We come here, best air, one of the fastest half miles in the country, and we are racing an engine with 14-15 races on it. So, it says everything about his engine program and this race team.”

Continued Schuchart, “We would’ve liked to have given Donny a run for his money and do it the right way, but we’re happy to get up there.”

Schuchart finished the week with two wins and a pair of second-place finishes. His first Volusia Speedway Park triumph of this year’s series came in Wednesday’s All Star Circuit of Champions main event.

This win was far from conventional. Schatz jumped out front from his pole starting spot after charging from sixth to first in the Dash. By the time Lap 5 was scored, he built a 1.278-second advantage over Cory Eliason.

Schatz entered lapped traffic on the sixth circuit. That allowed Eliason and Schuchart to close to within seven-tenths of a second. On Lap 10, Schuchart made a move on Eliason in Turn 2, but California driver regained second in the third corner.

A series of cautions and red flags occurred on Lap 14. The first took place when Brent Marks spun in Turn 1. Sheldon Haudenschild got upside down coming out of Turn 4 to complete the 14th circuit. Justin Peck, Tim Shaffer, Marks, Mason Daniel, Brian Brown, and Aaron Reutzel were also involved.

The second attempt at a restart saw Kasey Kahne slow through the second corner. Gio Scelzi had nowhere to go and flipped hard on the backstretch. He climbed into the ambulance, but a report from KCP Racing stated he was OK.

Schatz controlled the restart, with Eliason and Schuchart in tow. Brad Sweet was looking to get by Danny Dietrich for fourth, but he couldn’t finish the move.

While Schuchart struggled to get a run on Eliason, Schatz knifed through traffic, stretching his advantage to 1.861 seconds with 10 to go. Five laps later, Schuchart disposed of Eliason but was 3.827 seconds behind Schatz.

“I felt like we had a couple of restarts there in the beginning where I felt like I could get beside Cory and pass him,” Schuchart said. “The yellow would come out, and I would have to do it all over again.

“It just took too long to race with him the right way, but either way, we are just happy to get this thing back in Victory Lane … get two gators this week and end up with the big one.”

Schuchart got an opportunity to cap his week with a win on Lap 29, when Schatz slowed out of the second corner. The Tony Stewart Racing ace suffered magneto problems, and the crew changed the MSD box in the work area. He came back to finish 15th.

As for Schuchart, he sped away over the last two circuits to close out his first World of Outlaws win of the season by 1.447 seconds and bank a nice $10,000 payday.

“We just take one race at a time, and that’s all you can do,” Schuchart said. “We came down to Florida, and my biggest thing was let’s just go get a big gator. That’s all we were worried about.

“Some people asked me where we were racing next week, and I couldn’t even tell them. I take it one race at a time. I worry about where we are running that week, study tape like over sports, and believe in my team, the confidence they bring, and it’s showing.”

Dietrich held off the challenges of Eliason to hold down the third spot. David Gravel passed Sweet late to earn his fourth straight fourth-place finish of the week.

“We knew it was going to get slicker and didn’t know how wet it was going to be out of the gate,” Dietrich said. “We kind of went in between. We tried something the other night, and it didn’t work at all. So, we went back to doing what we were doing, and it seemed to work really well.

“We learned tonight that if we put ourselves in position, we have a chance. Logan is extremely good, and so is Donny, especially when they get out front. I tried to give it a shot on that [last] restart, but with his clean air and having to drive through the slick, it wasn’t the place to be. Maybe next year we can get a gator.”