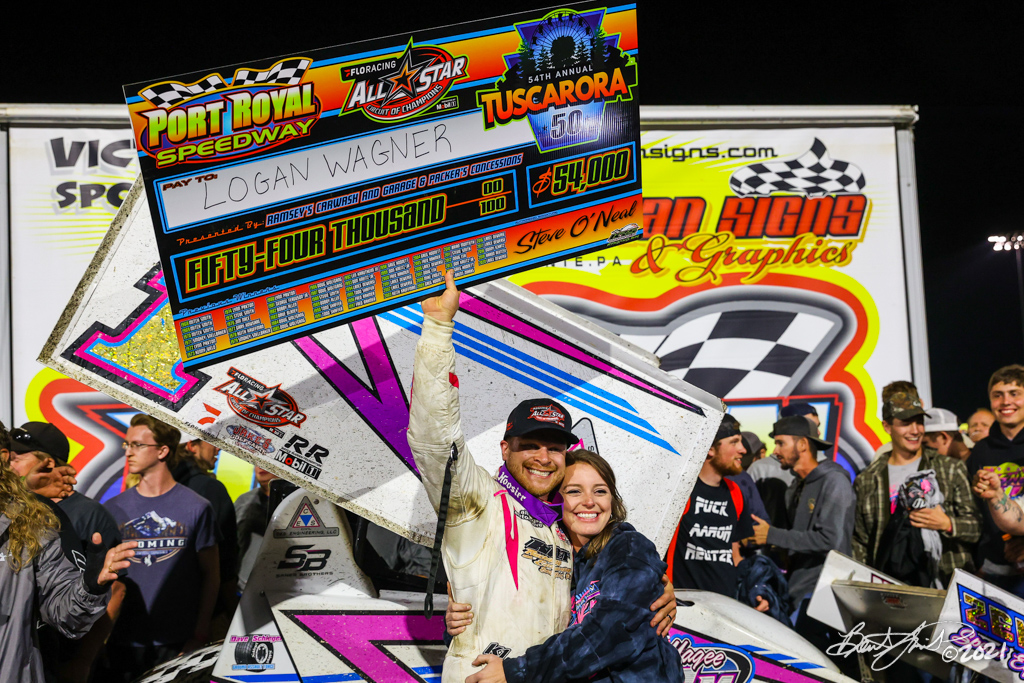 PORT ROYAL, Pa.: Everything seemed to be happening in slow motion on the last lap of the Tuscarora 50, and Logan Wagner couldn’t help but think back on a conversation he had with Tim Shaffer a little less than a month ago.

Wagner was at the Dingus Lounge in Knoxville, Iowa, talking to Shaffer and having a couple of drinks. Shaffer reflected on his 2010 Knoxville Nationals victory and how he almost spun out in the last corner because he was so excited over the possibility of winning the sport’s biggest race.

On Saturday night, Wagner found himself in the same position. It wasn’t the Nationals, but it was the Harrisonville, Pa., driver’s crown jewel.

Everything was in front of him. The prestige of winning the Tuscarora 50, a signature career win, and a $54,000 check … a mere half a lap away.

Like Shaffer, Wagner kept his emotions and talent in check and his car together. He made it through the final corner — barely — and completed a storied Tuscarora 50 march at Port Royal Speedway that won’t soon be forgotten. 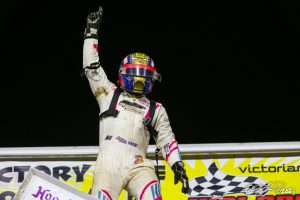 This will be a memorable race for Wagner for a variety of reasons. He wrapped up his fourth straight Port Royal track championship the night before, and of course, collected a huge first-place check.

But to win this event, he had to pass the best driver in the history of Port Royal Speedway. Dewease has won the Tuscarora 50 seven times and was the man standing in Wagner’s path to Victory Lane.

Unlike races in the past, things were against Dewease throughout the 50-lap marathon. He had an oil leak that soaked the cockpit, including his visor, and made visibility just short of impossible.

Then there was Wagner. The Zemco Speed Equipment No. 1 was on rails the entire night and closed on the struggling Dewease with three laps remaining and plenty of lapped traffic in play.

Wagner’s eyes got a little bigger as he closed to within .843 seconds on Lap 47. There was a chance, and he kicked it into high gear one lap later and slid Dewease entering Turn 3 to bring the crowd to its feet.

Somehow, Dewease, drenched in oil and with little visibility through his visor, ducked back under Wagner off the fourth corner to lead by .180 seconds at the stripe.

“I couldn’t see,” Dewease said. “I couldn’t even see on restarts by myself when I was going off of four to hit my marks. The easiest way to picture it is that you were driving in fog. The shield was so oiled up that you just couldn’t see through it.

“We gave it all we had. Once I got in traffic, I couldn’t even hold the steering wheel. I thought I was going to be alright, but then I got really slow behind those lapped cars. I knew someone had to be coming.”

It was Wagner. And he was like a Great White Shark looking for its next meal, and he was in attack mode to the wounded Dewease.

Wagner nailed the top in Turn 1 and shot off the corner to get to the outside of Dewease going down the backstretch on Lap 48. Leaving nothing to chance, he swooped under Kyle Reinhardt entering Turn 3 and drove away.

“It just so happened that I caught him at that time running as hard as I could and just stuck it. I didn’t want to slide up, got good drive, and just drove off the guy’s right rear and kept going. Next thing I know, something was waving, and it was the white flag. I’m like, ‘I can win this thing.’”

Wagner was fast all night. He set quick time for the 57-car field, won his heat, and lined up on the outside pole of the main event.

Rico Abreu was the early rabbit from his pole starting spot. Wagner settled into second, but Dewease, who started fifth was a missile, took second from Wagner with ease on the fourth circuit.

“My game plan before I got in the car was that I’m going to let Rico set the pace and not pressure him too hard,” Wagner said. “I’m going to let Rico do what he does, which is run the wheels off that thing. I knew he could do it, but I also know that clean air puts more downforce on the car, and you use your tires up.

“So, I wanted to be in dirty air and not use my tires up. Rico got by me setting a pretty good pace, and Lance got by me. I was cool with it, and thought, ‘If I could be in the top five at the halfway point and I have a good car, we can win this thing.” 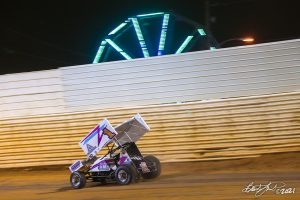 Dewease had the oil hose come loose sometime in the first 10 laps. It didn’t stop him from catching Abreu and slipping by on the bottom of Turns 3 and 4 to wrestle the lead away by the 12th circuit.

The rest of the first 25 laps went non-stop. Dewease’s tail tank got blacker and blacker with oil blowing out from under the hood. Wagner’s car also started to change color, which made him kick his car into high gear.

Wagner, who shot by Abreu for second on Lap 17, thought the black streaks were rubber from the track. Instead, it was oil from Dewease’s car, something that became even more noticeable during the five-minute break at the halfway point.

“I caught Rico and go half throttle through the middle, and I’m coming down the straightaway and looking off Turn 2 to try and see Lance,” Wagner said. “I’m like, ‘He must be gone.’ Next thing I know, he is right in front of me. He was right there, and it was like blood in the water.

“I’m thinking it’s starting to rubber up, and I need to go after it. I’m looking at the top wing, and there is black stuff all over it. I look at my car and at Lance, and it’s black all over his car. I’m thinking it’s rubber, and sure enough, it’s an oil leak.”

During the break, Wagner told his crew chief, Tommy Carl, that he was going to run the wheels off the car … checkers or wreckers. And that’s just what he did in a 25-Lap chess match that featured four caution periods.

Dewease did everything he could do to stay out front. The oil hose was fixed, but he was still soaked and dealing with vision issues.

Somehow, Dewease built a one-second lead by Lap 32. But every time he caught the back of the field and started to lap cars, Wagner closed and poked his nose under the oil-drenched No. 69K in Turn 4.

Anthony Macri entered the picture on Lap 34. He took third from Abreu and started to chase down Wagner. Zeb Wise shredded a tire on Lap 36, which set up a restart and allowed Macri to dive under Wagner and take second. Before the lap could be scored, Wise’s wing panel blew apart and negated the pass.

Wagner didn’t let it happen again. He guarded against Macri’s move in Turns 1 and 2 and set sail after Dewease and a huge first-place check.

“When you have a guy like Lance Dewease running the bottom in front of you, and you are running for $54,000, the only thing you can do is keep the car underneath you and keep your foot smooth,” Wagner said, “But you have to push as hard as you can.

The final caution came out on Lap 38, when All Star Circuit of Champions point leader Tyler Courtney blew a tire. That set up a 13-lap battle to the finish that Wagner turned into the biggest moment of his career.

“Like we talked about after Knoxville, this is the next pinnacle point, the next pinnacle race,” Wagner said. “So, we were really wanting to go after it. The nice thing about this is that we don’t have points to battle with, and I can go out and run as hard as I want every single lap.

“We did that from Lap 25 to Lap 50. The car was under us tonight. I can’t thank the Zemco crew enough for keeping the wheels underneath me. I could feed it as much as I wanted, and other times, I felt hooked up no matter where I went. It’s so unreal. I can’t describe it.”

Dewease was hanging on at the end and finished 1.439 seconds behind Wagner, who distanced himself from the field after taking the lead. He received $15,000 for the runner-up finish.

Macri settled for third, which gives him three podium finishes in the last three years in this event. Dylan Cisney was fourth, with Brent Marks completing the top five.

“It’s very disappointing,” Dewease said. “I’m not here for second, we’re here to win this thing. That’s all we worry about.

“It was very disappointing, because we had a good racecar and were good all night. We did everything right up until a mechanical issue. We can’t change that. Logan has been pretty good lately, and I’m glad he won it over somebody else, but it still eats at me pretty hard.”