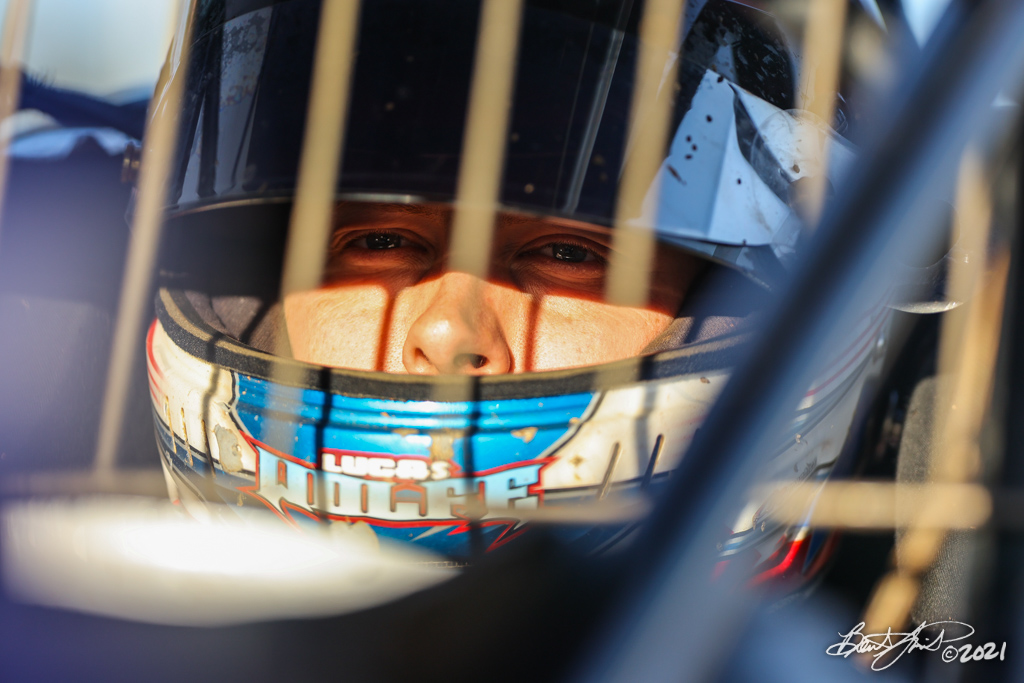 PORT ROYAL, Pa.: Lucas Wolfe’s struggles over the last couple of years aren’t just centered around not having overall speed.

It’s also about not being in competitive situations. That means running up front against top-flight drivers and teams and battling lap-after-lap for a win.

On Friday night at Port Royal Speedway, Wolfe was more than competitive. He had his most productive run in the last two years, dicing with the likes of Daryn Pittman, Cory Eliason, and Gio Scelzi before coming away with a second-place finish.

“I don’t have a good enough baseline, so ultimately as we pursue getting better — the car, me, the operation — my biggest downfall is not being in super-competitive situations nearly enough,” Wolfe said.

“That’s why it’s good to have a race like this. I had decent pace last night but didn’t get a good start and gave up ground. As competitive as the field is, if you have a wrinkle, you are going to get beaten up. From that standpoint, it was good to make it through tonight and get a good result.”

Wolfe has come into this year’s Tuscrora 50 with no fanfare and low expectations. All the talk has centered around the All Star Circuit of Champions regulars, Lance Dewease, and Aaron Reutzel.

But during the Night before the 50, Wolfe served notice. It wasn’t just that he’s here to run against the big dogs in one of the biggest races of the year, he showed that he still has the chops to win races in the 410 Sprint Car division.

Early in the night, Wolfe put himself in a good position by setting quick time for the 55-car field. He followed it up with a good heat-race run and finished second to Pittman in the Dash, which put him in the second row for the A-Main.

Wolfe didn’t slide much at any point during the 30-Lap feature. The lowest he was in the running order was fifth, but he showed some moxie after Rico Abreu and Anthony Macri spun, which moved him to third. He passed Eliason and held off Logan Wagner, while also challenging Pittman for the lead through the middle and end stages of the event.

“I’m very out of touch, because I haven’t been in that situation,” Wolfe said. “I can race with any one of those guys for 15th one night. You almost race as hard, but the stakes aren’t as high. If you make an error or do the wrong thing at the wrong time and you are running 15th, it hardly matters.

“If you make those kinds of moves when you are racing close to the front, it hurts. Those kinds of scenarios are good to be in from every aspect. It’s racing among the good cars, it’s good for me from a confidence standpoint, and I have a better idea of what I’m even looking for. Sometimes, you almost need to have a good night just to know what feels good or not.”

Continued Wolfe, “Quite frankly, if you don’t feel good, it’s not fun to run up front like that. So, all and all, a good night. It’s been an erratic year and combination of years for me, so I just need to keep moving forward.”

For Wolfe, it’s about making his limited opportunities count. Especially considering the financial situation with his team.

Wolfe is doing his own deal with the help of Jim and Laura Allebach. This is an expensive game, and considering this combination is just being put back together, the Mechanicsburg driver doesn’t have the benefit of running an 80 or 90-race schedule.

So, a race like Friday at Port Royal Speedway was huge … Not only for confidence but also for the bank account. And now, he is hoping to carry that same success over to Saturday’s Tuscarora 50, which pays $54,000 to the winner.

“I had a stretch of running better toward the end of Speedweek and had competitive races,” Wolfe said. “There is still a big part of these races when you have to time it right. You need to have your car good, you have to drive well, and then you have to start good. You have to make it count when you have an opportunity.

“There are a couple of races where I thought I was decent, but I just wasn’t in the right circumstance to benefit. I’m still in the spot where I need some circumstances to favor me and things to go my way. Ultimately, I’m hoping to hang out here for a while doing this, so I need to have more consistent runs like this.”