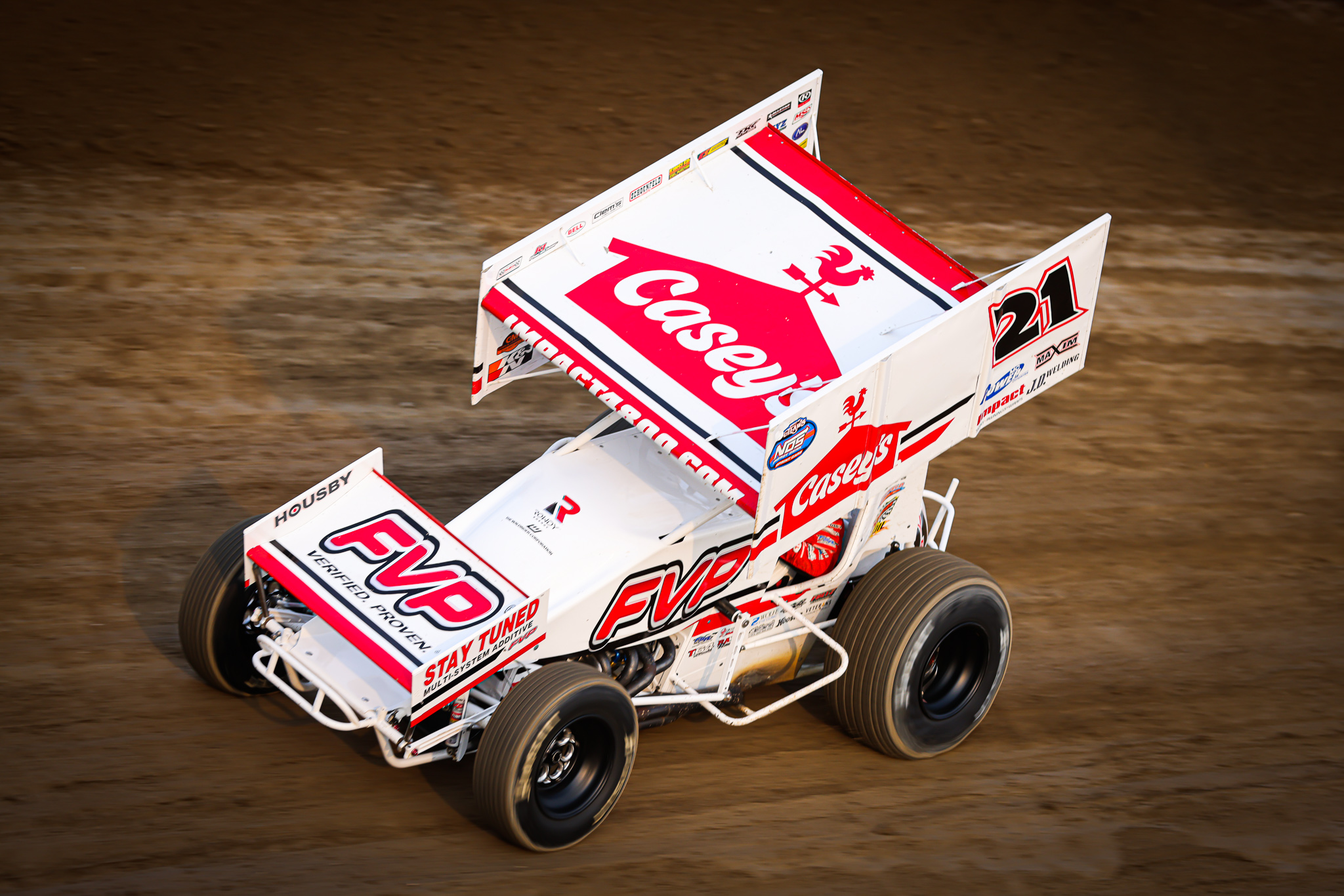 ROSSBURG, OH: If you know anything about Brian Brown, you are aware that he is a huge Kansas City Chiefs fan.

Brown has never been shy about showcasing his Chiefs fandom on social media, especially after his team won the Super Bowl a couple of years ago. His trademark smile was as long as the Mississippi River.

That expression has been missing in his racing endeavors of late. But it was back Wednesday night at Eldora, as Brown had Outlaw-type speed and mustered a runner-up finish against the best in the business in the Joker’s Wild at Eldora Speedway.

The result was much needed. Brown has been struggling the last couple of years, which led to the Missouri driver parting ways with long-time crew chief Chad Morgan and hiring his uncle and Sprint Car Hall of Fame driver, Danny Lasoski.

“I’m happy, man,” Brown said. “It’s like playing baseball and striking out 25 out of 30 nights. When you get back up on the 31st night, you aren’t going to have confidence. Then you get up there and hit a home run, and the next time you are up, you’re like, ‘I can hit a baseball.’

“This is mental, this is confidence, and it’s everything that goes into this. All the clichés are true. Danny said when he got here, ‘I don’t have a magic wand, and I can’t make this thing drive around by itself, but if we can work together, we can figure it out.’

“This is a huge step toward that. The Month of Money is here, and we have a big opportunity to make a lot of money. I’m happy, and I’m looking forward to the Knoxville Nationals and three more nights here.”

It’s hard to pinpoint why Brown’s performance has dipped over the last two seasons. He’s been good at Knoxville Raceway, his home track, but the speed and results didn’t translate to the World of Outlaws and other high-profile events.

See, sports can be quirky. Sometimes, it’s nobody’s fault. Relationships and situations run their course, and change is needed.

Brown is the owner-driver, and he had his share of self-doubt behind the wheel. But to find out if he was the problem, he needed to make a change, which led to letting Morgan go after 13 years of building Brown’s team into what it is today.

“It was just time,” Brown said. “Our ideas just didn’t line up, lot of just not good vibes going around, and at that point, you’ve got to do something different and shake it up. Luckily, Danny was available going into the Month of Money.

“Chad Morgan gave me 13 years of his life. He’s been with me since Day 1 of this Sprint Car team and is a huge part of this race team. He built this car. It’s not like we brought out a new car and all of that stuff, so I’m forever grateful for him giving up his life for 13 years.”

Continued Brown, “Chad is a very good crew chief, and he’s going to do a good job for somebody. Time just ran its course with me, and I can’t wait to see him get a good job and go out and do good things like we did tonight.”

You could sense a different feel in the Brown pit area at Eldora Speedway Wednesday night. The communication between crew chief and driver was good, and the right adjustments were made.

It’s not a surprise. Lasoski has been a mentor to Brown over the years and has played a big role in making him the driver he is today. So, if anybody can turn Brown’s fortunes around, it’s Lasoski.

“Nobody really knows me like he does,” Brown said. “He taught me everything I know. It wasn’t like, ‘Oh, God, I’m Danny, let me show you the way I do things.’ We do things the same, our language is the same, and this was the easiest night of racing we’ve had in three years. It was just basic conversation, good adjustments, and I think it shows.

“I think it’s huge having a crew chief that has driven. He can say, ‘Hey, it’s going to feel like this, and you run it just like this. When it does this, you do that.’ Even a couple of times tonight, my car was doing a little something, and he said, ‘The next time it does that, do this.’ Next thing you know, it clicked.

“My grandpa can’t come anymore, because he is too old, but having him in the pit area gave me a little extra pep in my step. The same with Danny. He just makes me feel like this is the right decision, and we are going to be fast.”

Brown was quick throughout Night 1 at Eldora. He timed well, charged from fourth to first in the Dash, and competed at a high level in the A-Main.

Carson Macedo, who has one of the fastest cars in the country, got by Brown on the opening lap of the 40-lap affair and went on to score the victory. But that didn’t squash the mood of the team after the checkered flag fell.

Brown made a huge change, and everybody on his team bought in and put in the work in during the week. It paid dividends, and now driver and owner have some confidence moving forward.

“I think I ran a good race,” Brown said. “As stuff like this goes on and you struggle a little bit, you question yourself as a driver. Then, the owner’s side questions the driver … Do I need to make a change, are my reflexes the same?

On Tuesday, Larson was running in the top 10 during the early stages of the Brad Doty Classic at Attica Raceway Park when he spun in Turn 2. He went to the pit area a short time later.

Things didn’t get any better at Eldora Speedway Wednesday night. Larson was running third in the final heat race when he slowed on the frontstretch with a broken torque tube. The good news for the NASCAR star is that he qualified well enough to start on the pole of the Last Chance Showdown and was able to salvage his night.

Larson won the consolation and lined up 21st on the grid in the 40-Lap feature. He came through the field to finish 10th.

COMPLETING THE TRIFECTA: Carson Macedo probably feels pretty good going into the Month of Money and the rest of the season.

In 2021, the Jason Johnson Racing standout has won races at Eldora, Knoxville, and Williams Grove Speedway, the big three in half-mile racing. More important, each track holds a crown jewel event in the sport.

There are two Kings Royals this week worth $175,000 each. The Knoxville Nationals is the sport’s most prestigious event and pays $150,000, and the Williams Grove National Open checks in at $75,000 to win in October. That’s a lot of money, and Macedo is one of the favorites to win each race.

“The 41-car has won at big prestigious half miles at Eldora, Knoxville, and Williams Grove this year, and we’ve been able to execute,” Macedo said. “Hopefully it stays that way the rest of the week.”

NEW DIGS: D.J. Foos has been running the Burmeister Racing No. 16 throughout the season at Attica Raceway Park and Fremont Speedway, earning six victories.

On Wednesday, Foos was running the Rich Farmer Racing No. 29. The team inked a deal with the Fremont driver a few weeks ago to compete at Eldora Speedway throughout Kings Royal week.

It was a bit of a struggle in the team’s first outing at “The Big E.” Foos qualified 16th in his flight and finished his night seventh in the C-Main.