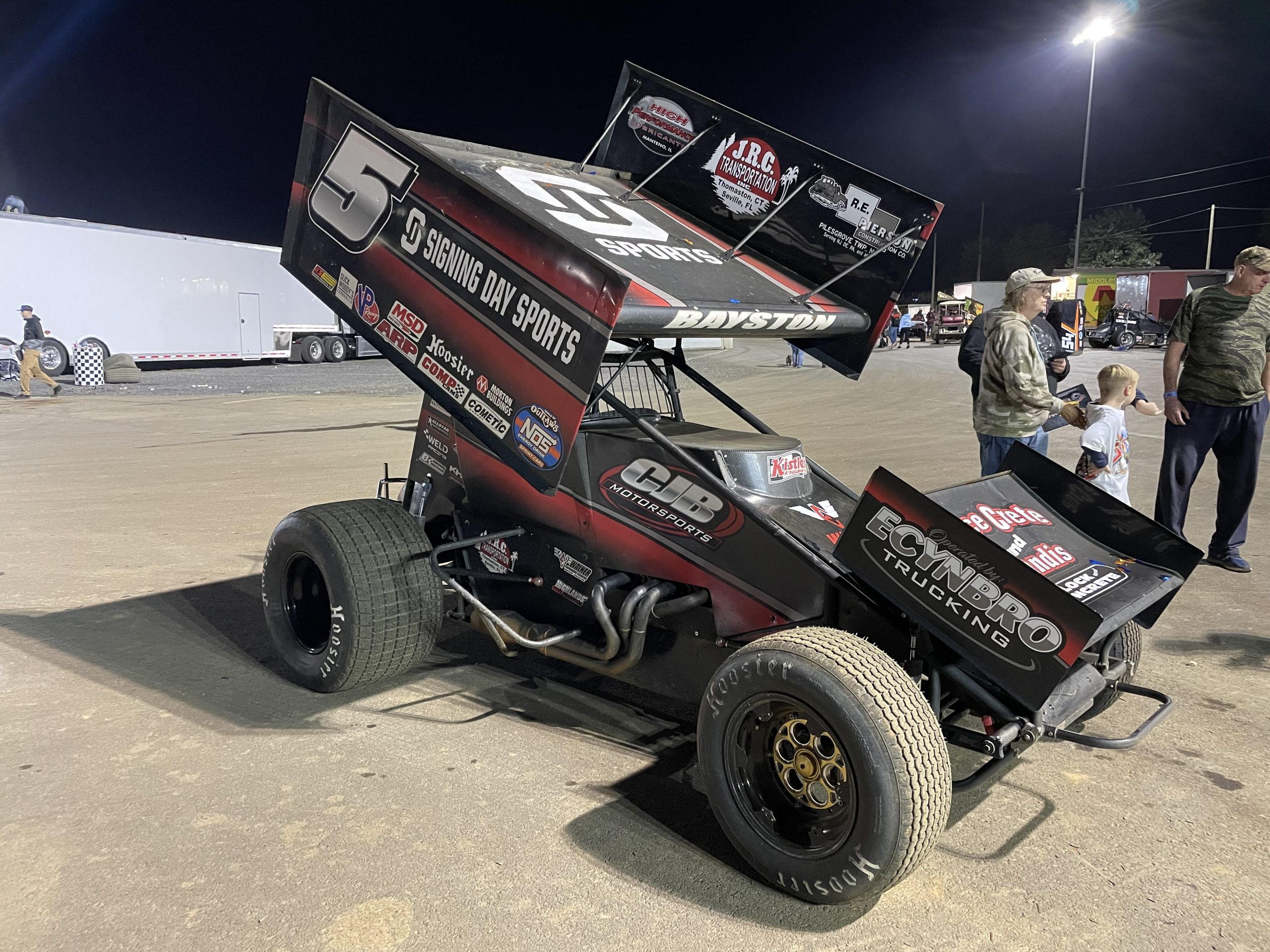 PORT ROYAL, Pa.: Spencer Bayston didn’t need any mental reinforcement that he made a good decision to join CJB Motorsports.

All the Internet swipes at the organization were put on mute. Bayston had confidence in his ability and in his new team that they could find speed and be competitive with the World of Outlaws the next two seasons.

The goal for 2021 was to just make races and build team chemistry. Turns out, Bayston and CJB are on the bonus plan and temporarily shut up the naysayers by dominating the 30-Lap Nittany Showdown at Port Royal Speedway.

“It feels damn good,” said Bayston, who has four starts with CJB. “It’s rewarding for everyone involved in the program who believed in me to bring me here. It feels good for myself, because I felt like it was a big change from a car I was successful and fast in to come to a program that had the ability to go out and win a lot of races next year.

“Just to be able to solidify, go home tonight, and think, ‘We’re in the right place and with the right group of people,’ it feels good. I know it feels good for them, and I’m just really, really happy with everyone involved … Signing Day Sports, JRC Transportation, Nyce Crete and Landis, High Performance Lubricants, Barry, Chad. I’m pumped and excited.”

It didn’t hurt that Bayston started on the front row, but the first couple of laps were far from easy. Jacob Allen got the jump on the start and was eager to get out front.

Allen went to the middle and slipped around Bayston in the first and second corner. The Indiana driver was having none of it and uncorked a slider at the other end of the speedway to lead the first circuit.

“It was really important to get the lead,” Bayston said. “You never know getting to traffic where you would rather be. So, I think it was good to get in front of Jacob, but I felt I was going to be able to race by him anyway.

“Overall, I’m just ecstatic with how well we performed tonight, how comfortable I was, and hopefully, this is how I feel every night.”

Brent Marks showed speed early, driving into fourth by the completion of Lap 2. Meanwhile, Bayston was building a lead that ballooned to 1.233 seconds three laps later.

The leader caught the back of the field on Lap 7. Bayston’s advantage shrank to .980 seconds and was gone when Kraig Kinser slowed coming out of Turn 4 to bring out the first caution on Lap 10.

It didn’t take long for Bayston to fire off on the restart. Marks was making moves of his own, taking third from Kerry Madsen before the caution and shooting by Allen for the second when the race went back to green on Lap 10.

But, Allen didn’t go away. The Shark Racing ace regained the spot by the completion of Lap 11 and started to chase down Bayston, who was running all alone up front.

Bayston caught the back of the field by the 17th circuit. This gave Allen and the rest of the field a chance, or so they thought. Unfortunately for the competition, the CJB Motorsports entry got better, and so did the driver.

By the time Lap 20 was scored, Bayston had built a 1.938-second lead. Marks started to falter with an ill-handling race car, and David Gravel and Donny Schatz were making their way toward the front of the field.

Gravel took third from Madsen on Lap 23 and was by Allen for second four laps later. The problem for the Big Game Motorsports driver is that Bayston had built a three-second cushion by that point.

“I felt like early in clean air, nobody was going to drive by me,” Bayston said. “Once I got to traffic, I slipped up a little bit, but I was able to change a little bit of what I was doing and got right back to my pace.

“That’s just a testament to what we were able to do with the car and what Barry [Jackson] was able to do. I felt the confidence all night was really, really good. From start to finish, we were 100 percent, and that’s what it takes to win these races.”

Continued Bayston, “We capitalized on a good Dash-draw night and got it done. We have a lot to forward to, and I’m happy to get the first one out of the way. I’m hungry for the next one, so bring on next year.”

There was no stopping Bayston over the last four laps. He knifed through traffic and drove away to an impressive 4.750-second victory.

Gravel had to settle for second. Schatz stormed from 12th to third and earned Hard Charger honors. Madsen and Allen completed the top five.

“We are going to continue to learn. We’re trying something different and found something that works really well. We just have to keep growing and building together. Cody [Jacobs] wants to keep doing this, and I want to keep doing it. We don’t have a weak guy on the team, and we just have to work together to fine tune it at all these racetracks.”

In the 305 Sprint Car Invitational, Kenny Heffner topped the field in the 20-Lap main event. Garret Bard and Justin Mills completed the podium.