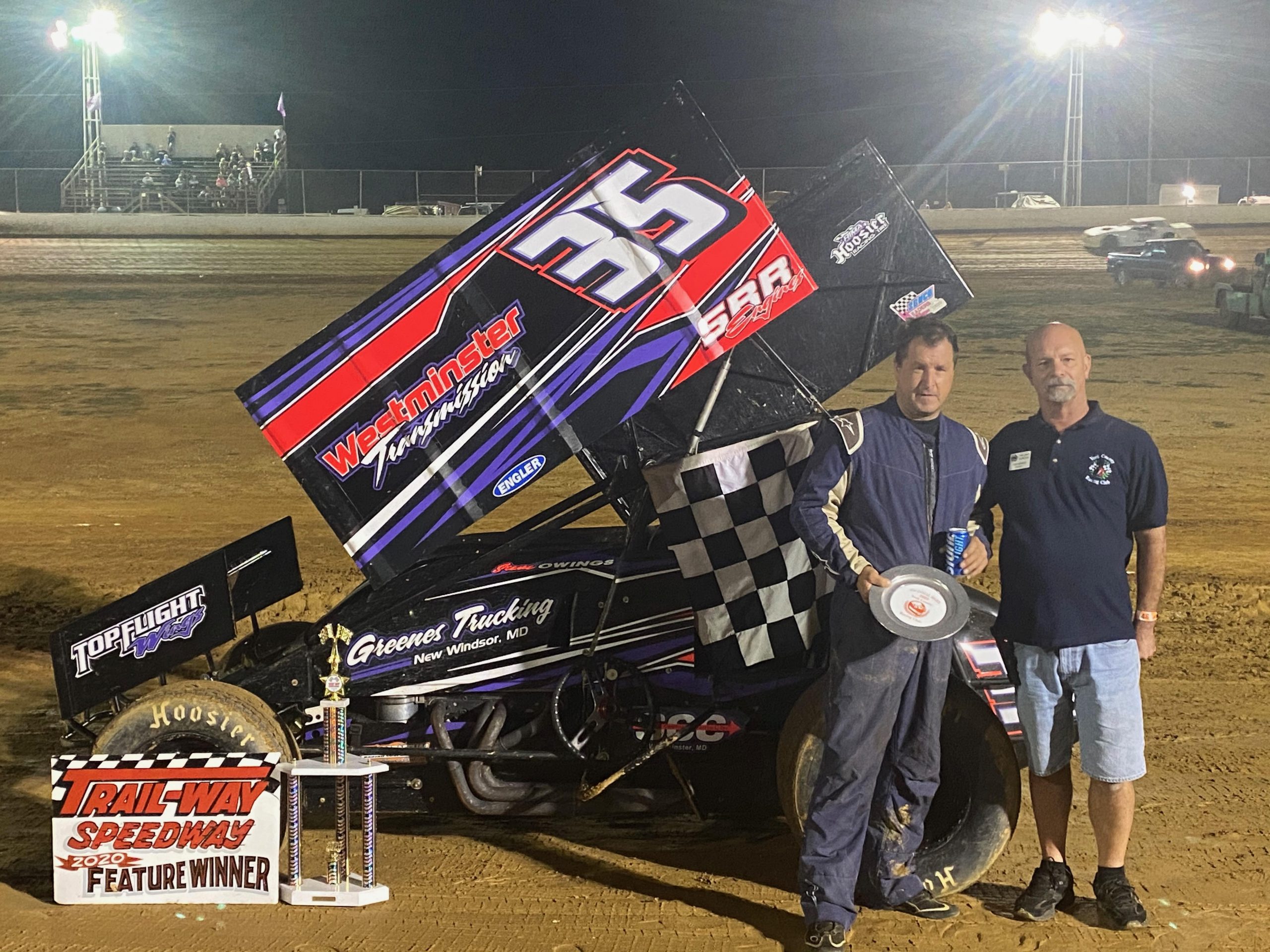 HANOVER, Pa.: It’s getting to the end of the season, which means Steve Owings is getting faster and earning more wins.

A week ago, Owings won his second Trail-Way main event of the season. He went to Lincoln Speedway one night later and was competitive in a pair of 358 Sprint Car features at the Pigeon Hills facility.

Next up was the Trone Outdoor 358 Sprint Car Championship, which was moved from Friday to Sunday night. Owings continued his late-season success and captured the 30-lap event for his 28th career Trail-Way Speedway victory.

“The track dries out a little bit,” said Owings when asked about his success later in the summer months. “If it’s heavy, everybody is fast.

“I just need it to slick off a little bit, and we can run the bottom and top and with the little wing on there. I can maneuver through traffic a lot better. Once those guys get off the gas with those big wings, they are going to start pushing. Here, for me, the little wing is better. Maybe not in clean air, but when we get to traffic.”

That proved huge in this one.

Owings started on the pole and surged ahead of Tim McClelland at the start. Cody Fletcher and David Holbrook followed close behind.

The first red flag of the event occurred just as Lap 3 was scored. Dylan Norris and Mike Bittinger got upside down at the exit of Turn 4, with Jeff Rohrbaugh spinning on the inside of the frontstretch. All drivers were OK.

One lap was completed before the caution flew. Zach Alleman stopped against the fence in Turn 4 and was towed to the infield.

Owings continued to lead on the restart. McClelland was able to get a run on the low side of Turns 1 and 2, but the leader had too much speed off the cushion.

The frontrunners caught the back of the field on on the 10th circuit. Two laps later, Holbrook cartwheeled between Turns 3 and 4 to bring out the second red flag of the event.

McClelland tried to poke his nose under the leader in the first and second corner on the restart. Owings, however, was strong, especially through Turns 3 and 4 and was able to maintain a .657-second lead at the halfway mark.

“We could run that thing in there, and it just sets down,” Owings said. “One and two, I was being a little bit cautious.

“The more the lapped cars were there, the better we were because I had to run harder. The harder I run this thing, the better she is. Hats off to the sponsors and everybody who helps us do this, because it’s a lot of fun.”

After Dylan Orwig brought out the caution on Lap 17, Owings took off on the restart and built a one-second lead by Lap 20. McClelland kept coming, and he cut that advantage down to .592 seconds by the completion of Lap 22.

McClelland was close, but he got hung up behind Orwig on Lap 24. That allowed Owings to bump his lead up to .753 seconds.

“I was able to get right up to him and somewhat underneath him,” McClelland said. “The harder and harder we ran, the more I was able to keep up.

“He would slow down when he got to lapped traffic, and I could get back on him. That’s the name of the game, just getting through lapped traffic.”

Lapped traffic almost cost Owings the race. Coming to the white flag, the leader got trapped behind Steve Wilbur and Billy Heltzel Jr. and was forced to get on the brakes. It also allowed McClelland to close to within .421 seconds.

“They were side by side, and Wilbur didn’t know what to do with Heltzel,” Owings said. “All I could do is hope that the 59 passes him, and I’m going to be right behind him. That was going to be the fast line.

“We all but stopped in that corner, but thankfully, we got clear. Sometimes, you just need to be lucky to win these things.”

It also helps being good, and Owings was that over the final circuit. He was flawless through the corners and down the straights, taking the win by .475 seconds.

“Last week, we had a good week,” Owings said. “We should have won at Lincoln, and I just let the team down a bit in the first feature.

“We came back this week, and I’m glad Trail-Way didn’t cancel the whole deal and postponed to Sunday. We just had a lucky pill draw. That put us on the front row, and that’s what made it, truthfully.”

“I’m tickled, and I couldn’t do it without the guys,” McClelland said. “We’re tickled to run with Steve, and it’s a real blessing.”

Related Items:More Racing News
Your Ad Could Be HereContact Jeremy Elliott at 1-717-805-0483
1 Comment