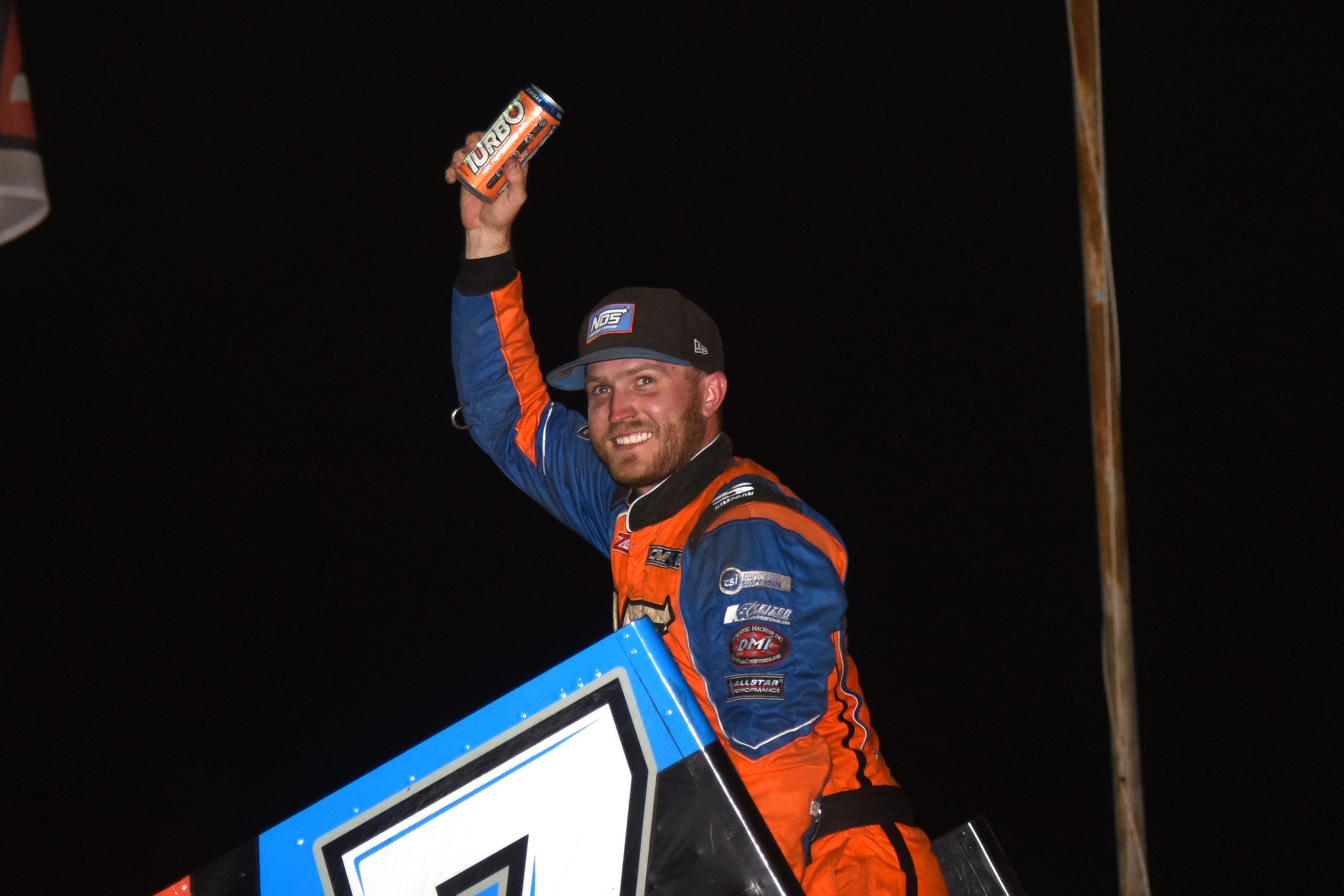 BECHTELSVILLE, Pa.: A good showing for Tyler Courtney in his first full year in a winged car would’ve been two or three wins and competing for the FloRacing All Star Circuit of Champions title by year’s end.

Courtney has exceeded expectations. Check that: He’s smashed through the winged Sprint Car door and has become a major player in the division.

The list of accomplishments grew even larger Thursday night. Courtney added to his 2021 resumé, which includes a Kings Royal title, by claiming the Thunder on the Hill main event at Grandview Speedway and a $6,000 payday.

A KEY MOMENT: Courtney started third on the grid and followed Zeb Wise and Anthony Macri through the early stages of the event.

Macri was pinned to the bottom and middle of the speedway for the first five laps. Courtney remained close and was able to slide into second on Lap 11 after the Dillsburg, Pa., ace went to the top.

That put Courtney in position to challenge for the lead and the win when Wise got crossed up past the halfway point.

THE WINNING MOVE: Wise was positioned on the cushion through the first half of the 35-Lap affair, but he couldn’t get away from Courtney.

The All Star Circuit of Champions point leader cut Wise’s lead to .621 seconds on Lap 15 and pulled a slider three laps later in the first and second corner. Wise ducked under Courtney and maintained the lead on Lap 18.

Wise appeared to hit the berm, shot up the track and over the cushion in Turns 3 and 4 on the 19th circuit and brushed the fence. That allowed Courtney to surge by on the bottom and take the lead coming off the fourth corner.

BATTLING TO THE END: A caution on Lap 24 gave Courtney clean air but also closed up the field for a 12-lap sprint to the finish.

Macri got by Wise for second and found the rubber at the bottom of the speedway. He closed to within .570 seconds on Lap 33 and made a bid on the outside coming to the white flag.

Courtney opened up a small gap on the last lap, but he got tight trying to lap a backmarker and was out of shape in Turn 4. The two touched slightly at the fourth turn exit, with Courtney taking the win by .611 seconds.

BY THE NUMBERS: It was Courtney’s eighth All Star Circuit of Champions victory of the season and ninth overall. The win was also his 25th top-five finish with the series.

Courtney wasn’t the only winner on the night. The All Stars swept five of the top six spots in the A-Main, and invaders bagged six of the top 10 spots.

THEY SAID IT: “I knew I was probably going to get tight behind the lapped car, and I knew he wasn’t going to — he might drive through the lapped car … I tried to block him a little bit with the lapped car, but the lapped car got grip, so I just had to get down there as quick as I could. I didn’t know who was behind me, but Anthony, he’s aggressive and fun to race with. Luckily, he raced me pretty clean there.” — Tyler Courtney on the last corner of the 35-Lap main event.

“I knew once I got to him [Zeb Wise], he was going to turn up the wick a little bit more. He was trying to get by the lapped car, because I think track position was key. It was tough to get by lapped guys, they were getting faster and faster as the race went on, and I think he just got up on that berm, clipped the inside tire, and that shot him up the track. That was my opening to get to the lead. — Tyler Courtney on the pass for the lead.

“I wasn’t quite expecting it to start cleaning off and get faster on the bottom. I was just trying to watch lapped cars to see if they were pulling away from me, and luckily, I was able to see that and move down. I almost gave it away, but man, it’s awesome … my eighth win of the year. It’s been really good.” — Tyler Courtney on his eighth win of the year with the All Stars.

“Like I said last week, our 13-Car always seems to come on the last half of the race. I got a restart there, got my wing in the trunk, and changed my lines up a little bit. It’s kind of what I started doing there before the red came out. I was just being pretty sloppy. Really, this whole race, I didn’t run that great of a race. Shawn and Kurt gave me an awesome racecar every time we hit the racetrack. It’s frustrating. I feel we are knocking on the door for a win; it’s all about consistency, right now. We need to find that extra tenth, clean my act up a little bit, and we will be up front.” — Third-place finisher Justin Peck.