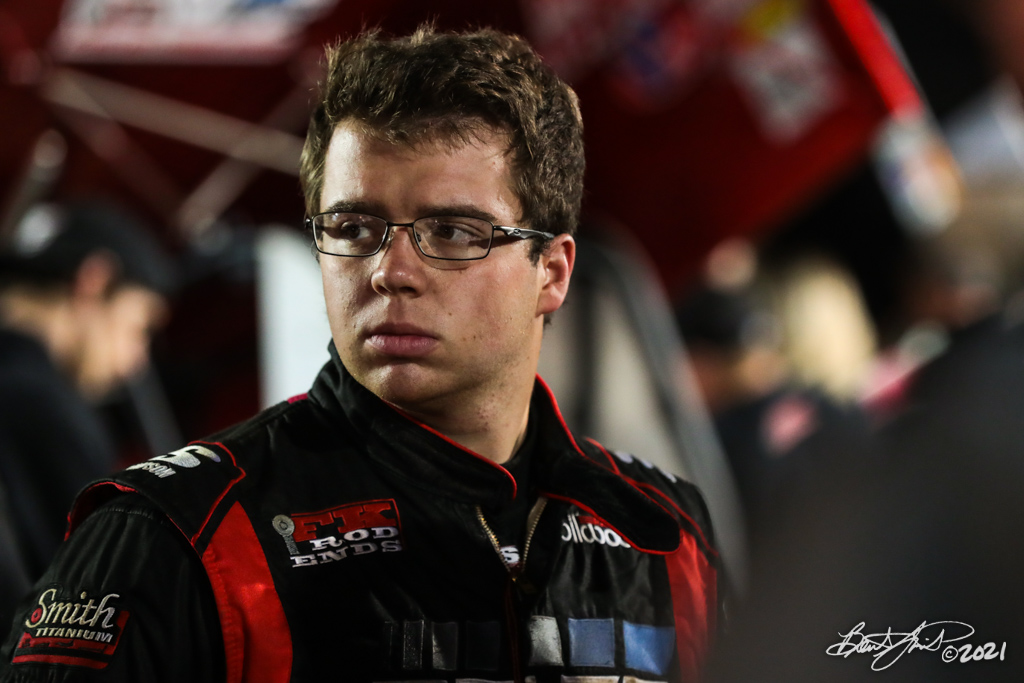 There aren’t many drivers from outside California who can tackle the tough Trophy Cup field for the first time and turn heads. Staying on all four wheels can be a difficult task.

The odds of success are steep. There aren’t many tracks like Thunderbowl Raceway, and the field is loaded with experienced drivers from around the country.

None of that mattered to Anthony Macri. The Pennsylvania native hooked up with Steven Tiner and Kyle Hirst to finish second in his first outing at the tricky Golden State Speedway. If that wasn’t enough, Macri came away as the top point getter on Night 1 of the three-day affair.

SprintCarUnlimited.com caught up with Macri late Friday afternoon and discussed the nuances of the Tulare, Calif., track, his finish, and more.

A lot of guys have showed up at Tulare for the first time and struggled. You went out the first time during the Trophy Cup and finished second and are high point man. How surprised are you that it went that well?

AM: I honestly didn’t think we were going to make the A-Main. Hot laps, I thought I was going to be terrible because I didn’t get good laps and there were 10 cars on the track at the same time. I talked to Steven [Tiner] and Kyle [Hirst], got my confidence up to run it wide open, and laid down two good laps and went third quick. In the heat race, we got rolling pretty good … I just never expected to do what I did in the A-Main. They just gave me a really good car, and everything just fell into place. Never in a million years did I think my first race at Tulare would end like that. It’s pretty badass.

Were you intimidated the first time you got on the track and what adjustment did you make from hot laps to time trials?

AM: I don’t want to say I was intimidated. I think it was more of a nervous kind of thing, because everyone talks about getting into one and the bump and if you hit it wrong, you flip. I did hit it in hot laps a little bit, and it kind of started me a little bit. I just knew I had to drive it. I talked to Steven, and Kyle Hirst came over, and they just told me to drive it wide open and what else to do. Just talking to them made me feel better about the whole situation. I knew I was going to be by myself, so I didn’t have to worry about dirty air, and I just held it to the floor and tried to run two smooth laps.

Did laying down those two laps in time trials and timing third give you the confidence you needed to perform at a high level the rest of the night?

AM: It gave me a pretty good confidence booster the rest of the night. Obviously, there are 85 cars here, and we were third in our group and seventh overall. From that point, I knew I had to race, stay out of trouble, and get as many points as I could. Come feature time, I was pretty comfortable in the car. I knew they gave me a good car and that it was up to me. The first half of the race, I made a lot of mistakes and was pretty upset with myself. I started getting pissed and started driving really, really hard on the top and made something happen.

Can you compare this place to anything else you have seen and is there anything you’ve seen somewhere else that you can use here as a driver?

AM: No. We don’t have anything back home like this. It reminds me of Lincoln and reminds me of Grandview, but I don’t know if that’s just because they are the smaller tracks back home. It’s a little track, and it’s definitely intense. You’ve got to drive hard the whole time, and it’s really fun.

What’s the most difficult thing about Tulare?

AM: I guess it’s trying to run the wall and not getting pulled into it and crash. Steven and Kyle talked to me, and I listened to them. It made it so much easier and put me in the right frame of mind. I think it lessened the learning curve. They both race and know what it takes and what you have to do. Having all three minds work together was really nice. It really let me be at ease.

If someone would’ve told you that you would be high point man after Night 1, you probably say ‘No way.’ That being said, do you feel like this weekend has already been a success no matter what happens the rest of the way?

AM: Yeah. Obviously, I wanted to do really well out here, but my expectations were not that high. I just wanted to get in the show each night. Obviously, we have tonight and tomorrow night to get in the show, but I wasn’t expecting to make the show the first night, let alone finish in the top 10 or second. I thought we would be a backmarker, not because of the car but because of me. They have a really good car and wherever they go in California, they do well. I knew they had the car, and it was just up to me to take it to the front.