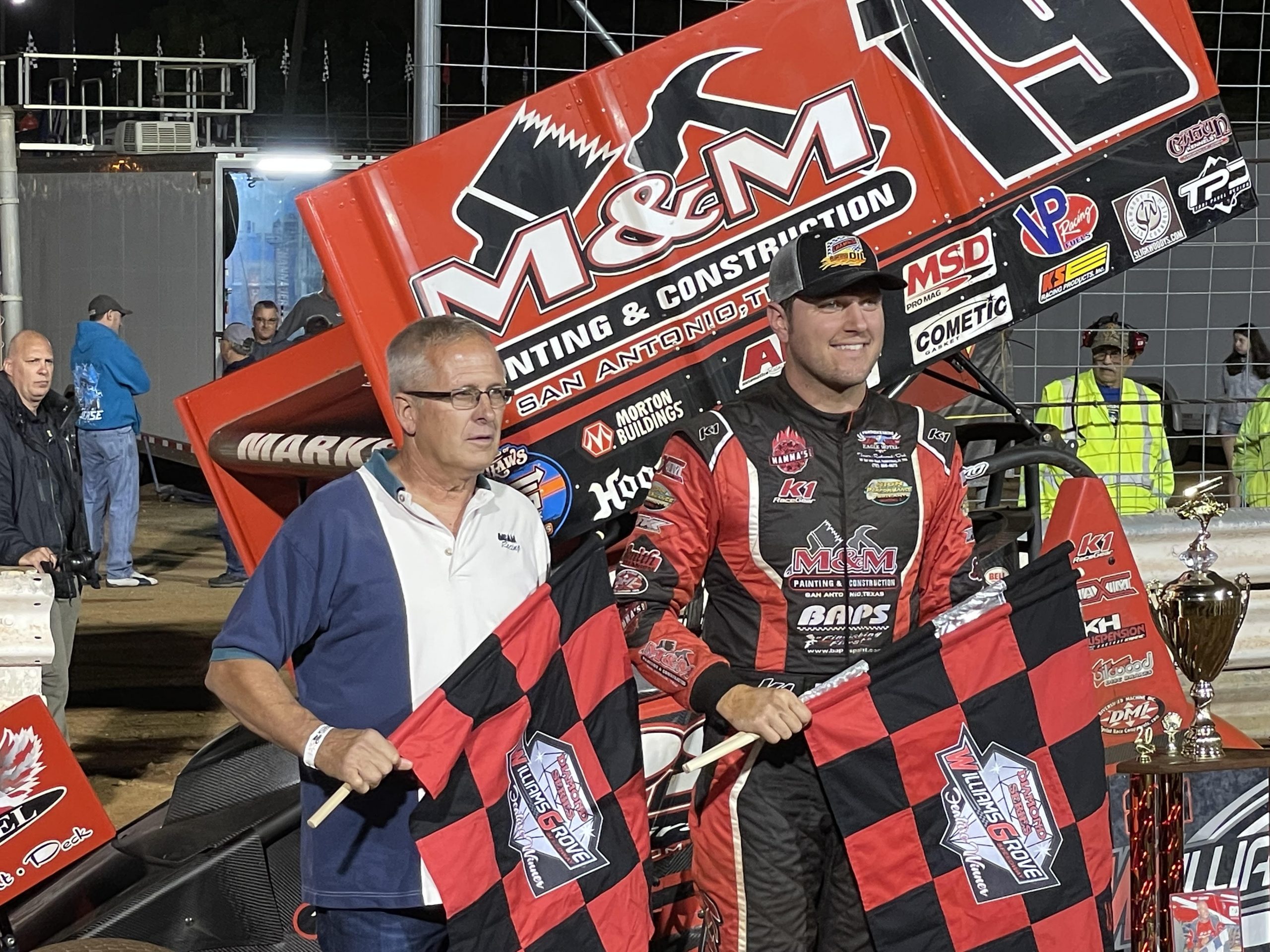 MECHANICSBURG, Pa.: Brent Marks came into this weekend wanting to get back on track after a sub-par stretch last weekend.

That’s what good teams do. They shake off bad performances, get to work in the shop, fix any issues, and get back to contending for wins.

The past three races were a distant memory last night at Williams Grove Speedway. Marks was fast from start to finish and earned the victory in the 25-Lap Todd Shaffer Tribute, which carried a $6,088 payday to the winner.

“Last weekend was pretty disappointing, but sometimes that’s how it works out,” Marks said. “We thrashed really hard all week to get everything back together and repaired correctly, and we came out tonight swinging hard, and to get the win is really cool.

“It, obviously, helps starting on the front row, but you’ve got to have a good car and still have to win the thing. I’m happy with the way the year has been going, and being able to bounce back after a weekend like that shows how dedicated everybody is to be successful and win races.”

KEY MOMENT: This one was pretty much over at the pill draw, with Marks picking the pole in the Pennsylvania Speedweek format.

Marks got the jump on fellow front-row starter T.J. Stutts when the race went green and built a two-second lead by the 10th circuit.

Despite having to deal with lapped traffic, Marks increased his advantage to 2.878 seconds by Lap 15. A late caution wiped out the lead and put the speedy Dietrich on his tail tank for a three-lap shootout.

FINISHING OFF THE WIN: Chase Dietz spun in Turn 4 on Lap 23 and wiped out the 2.511-second lead Marks built over Dietrich, who started ninth on the grid.

Marks rocketed away on the start, which Dietrich felt should’ve been called back. Within one lap, Marks was ahead by .717 seconds, and he increased that to 1.481 seconds by the time he took the checker.

“I did that intentionally,” Marks said of the late restart. “I was trying to trick him a little bit and catch him off guard. Luckily, being the leader of the race, you can control that. He would try to do different things, too.

“I knew he was good, because he came from ninth and ran up to second, so you’ve got to be really good to do that with the way the track was tonight. It’s just very difficult to find grip out there, so I didn’t want to give him an opportunity to show his nose or try to dive around me.”

BY THE NUMBERS: The win was Marks’ 10th of the season and first since July 31, when he captured the Living Legends Dream Race at Port Royal.

This is also the first time Marks has cracked double digits in wins over a single season in his career. His previous best in a season was six.

“We are going to be working really hard to get more wins, but it’s cool to be in double digits,” Marks said. “Once we started getting some wins [early in the season], that was my main goal … to get to 10-plus. We got to that, so now we need to keep going.”

SECOND SUCKS: That was the sentiment of Danny Dietrich after he charged from his ninth starting spot to a runner-up finish.

“I’m just frustrated,” Dietrich said. “Second sucks. Second is the first loser. We need to time trial better and put ourselves in position, and it’s as simple as that.”

Dietrich had some fuel pick-up issues early in the night and timed 20th out of 26 cars. He drove it to third in his heat race and lined up in Row 5 for the main event.

The Gettysburg, Pa., driver wasted little time getting to the front. After Freddie Rahmer blew a motor on Lap 5, Dietrich tip-toed into fourth. Five laps later, he took third from Stutts and chased down Brown by Lap 17.

A caution gave Dietrich life on Lap 23. He tried to stay close, but Marks was able to pull away over the last three laps to collect the win.

“I thought we had a chance to win the thing with as much speed as we had,” Dietrich said. “I felt the start should’ve been called back. You don’t see many single-file restarts get called back, but that one was pretty bad.

“We have a window to go green, and anything outside of that should be called a jump. As soon as he took off, I knew I didn’t have a shot with that restart, and I literally went down the frontstretch thinking, ‘How the hell can you let this go?’”

Continued Dietrich, “But, they did, and that seems to be the inconsistency here and at a certain other racetrack, and it’s why we don’t go to those tracks all of the time.”

WIN NO. 7: Derek Locke continued his dominance at Williams Grove, blasting his way to his seventh straight victory in 358 Sprint Car competition at the famed oval.

Locke, who remained perfect on the season at the Grove, started third on the grid and passed Justin Foster and Matt Findley to take the win. He will go for the season sweep on Sept. 24 on the same night as the World of Outlaws Tune-Up.