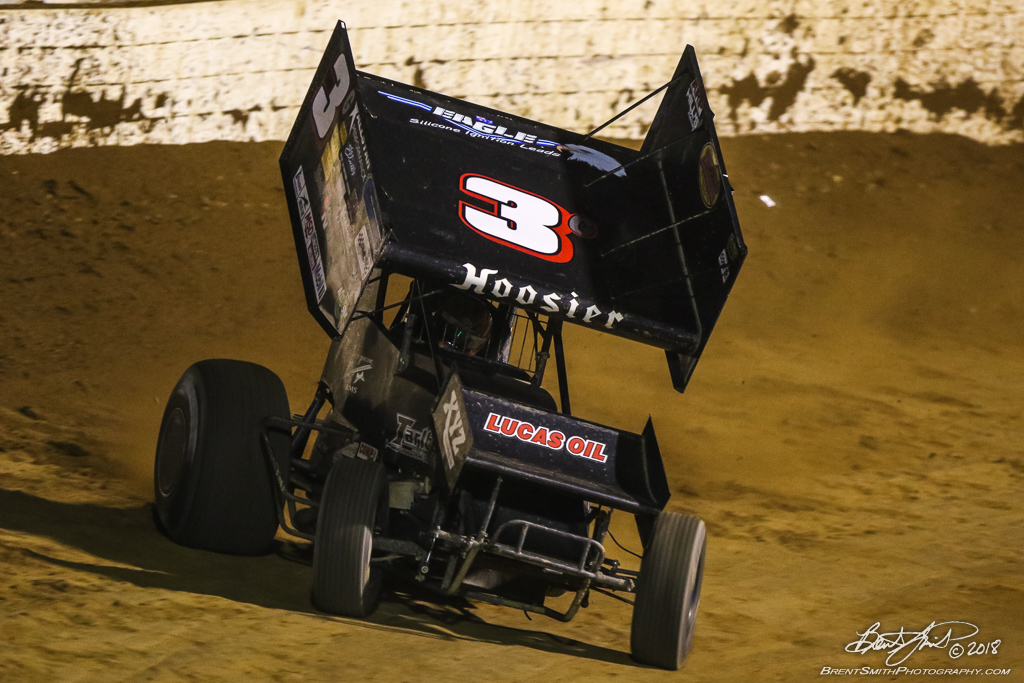 ABBOTTSTOWN, Pa.: Carson Macedo has raced all around the country, and there is no place more difficult for him than central Pennsylvania.

It’s not just the competition. The track configurations are unique, and Macedo doesn’t have a lot of laps in the region.

That didn’t bode well for Macedo Saturday night at Lincoln Speedway, a track he was visiting for the first time. For the California native, a top-10 finish and being competitive was like a win.

But, Macedo was on the bonus plan. He showed speed throughout the night and took advantage of Freddie Rahmer’s misfortune to score the victory in the 30-lap Arctic Cat All Star Circuit of Champions main event.

“Central Pa., for me, especially being a guy growing up in California, it’s the toughest place by far in the United States,” said Macedo, who banked a nice $5,000 payday for his third All Star win of the season.

“To get a win here is not something I expected after the first two nights [at Grandview and Williams Grove]. We needed to find something to get us better on these paperclip tracks, so we made some adjustments that really helped us and made the car a lot better. That was the determining factor in getting the win tonight.”

Tim Glatfelter started on the pole and shot under Macedo in Turn 2 to grab the lead. But, the California native pulled a slider in Turn 3 to wrestle the lead away and hold it at the exit of Turn 4.

Glatfelter got a good run down the straightaway, and it appeared the two leaders made slight contact, which led to Glatfelter spinning. He got upside down and rolled over the inside wall before the lap could be scored. He was OK.

Macedo owned the complete restart. He built a .857-second lead over Rahmer, who moved from third to second on the starting grid.

The frontrunners caught the back of the field on Lap 6. Rahmer took advantage, as he won a three-car battle with Macedo and a charging Kyle Larson by shooting to the bottom of Turn 4 on Lap 7.

But, Rahmer didn’t get away. Macedo pulled to within .147 seconds on Lap 8, with Larson lurking .662 seconds back.

Action slowed on the 10th circuit, when Danny Dietrich spun in Turn 3. The Gettysburg driver started 11th and was running seventh at the time of the incident.

Rahmer got a good jump on the restart and opened up a one-second lead within three laps. He caught the back of the field on Lap 15 and put Dietrich a lap down.

Dietrich didn’t go away. He continued to try and slide Rahmer, which allowed Macedo to cut the advantage to .580 seconds by Lap 23. Two laps later, Rahmer, Macedo, and Larson ran nose-to-tail.

“Freddie was so good, and I don’t know if I could’ve got him,” Macedo said. “I really needed traffic. I needed something to ruffle him up, so I could either get enough of a run down the straightaway to slide him, or, he would go to the bottom, and I could rip around him.

“I’m just so thankful for the guys [on this team]. They work so hard to get my car good, especially in Pa. if your car isn’t good here, it’s super hard to win. My first time at Lincoln and getting a win … I’m stoked.”

Macedo tried a slide job in Turns 3 and 4 on Lap 27 but fell short. Then again, he didn’t have to worry about making the pass.

Rahmer was going to be tough to beat as he raced down the backstretch on the 28th circuit. But just as he approached the third corner, smoke started to pour out of the No. 51, and he rolled to a stop in Turn 1 with a motor issue.

That put Macedo out front, and he didn’t disappoint over the last three laps. He opened up a .750-second lead within one lap and added another two tenths in his favor when he got the one-to-go sign.

It was all Macedo, as he took the win by .847 seconds over Larson, Tim Shaffer, and Brian Montieth, who came from 14th. All Star Circuit of Champions point leader Aaron Reutzel was fifth.

“Kyle is a phenomenon in the sport, and sometimes, it’s really frustrating racing against him because he’s so good,” Macedo said. “But you know what, he pushes us all to be better, and I really enjoy when he comes to race with us.

“If you think you are good, he will show you that you aren’t really that good and that you need to get better. You need guys like that.”

Continued Macedo, “He does the NASCAR thing — it’s his bread and butter — but he comes down to race with us and teaches us a thing or to. So, to finish in front of him and get a win, it’s a pretty stellar night.”

For Larson, it was his third runner-up finish in four events. He was sixth in the second twin 20-lap main event at Williams Grove Speedway Friday night.

“The tracks have started out with a lot of moisture in them, and it’s hard for them to get slowed down,” Larson said. “The pace has been really fast, traffic is one lane, and you have lappers racing the leaders, which makes it more difficult than it already is. It was just tough to pass tonight.”