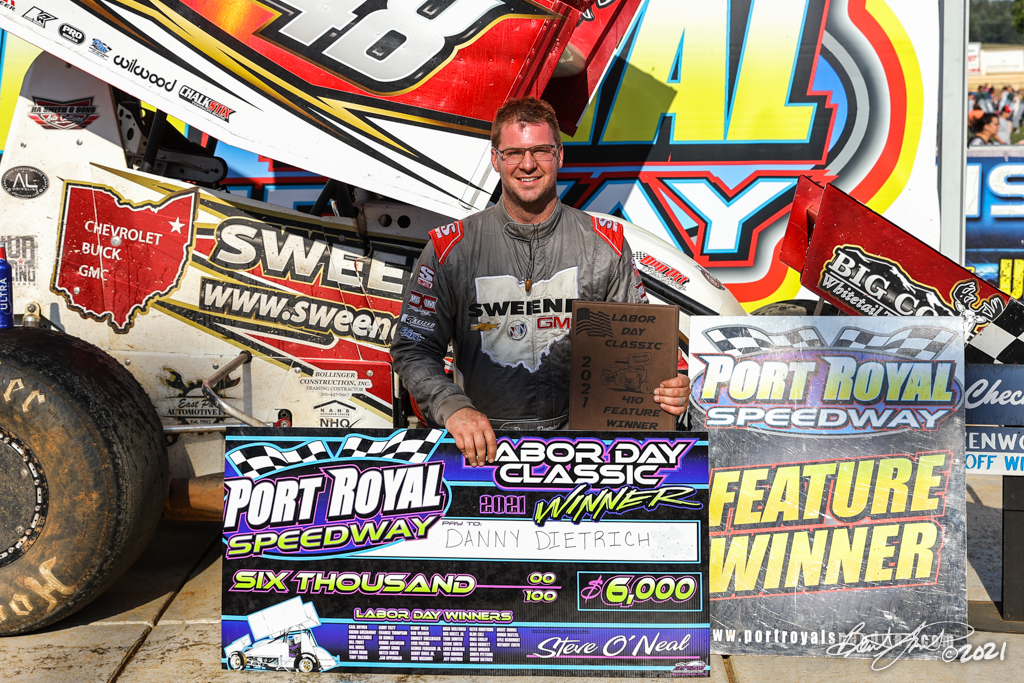 PORT ROYAL, Pa.: If you look at Danny Dietrich’s 2021-win total, it would appear that he has struggled throughout the season.

That isn’t the case. Dietrich has shown speed and been consistent. The problem is that it hasn’t amounted to a strong number of wins, but that is something the Gettysburg, Pa., driver is doing a pretty good job of changing.

Things are starting to fall Dietrich’s way. Of course, he doesn’t need any breaks when it comes to the Labor Day Classic at Port Royal Speedway.

Dietrich is an ace when it gets dry-slick. That showed again Monday, when he captured his fourth career Labor Day Classic victory in the 25-Lap Sprint Car main event. The win was worth $6,000.

“We are finally having things go our way,” Dietrich said. “We still aren’t starting on the front row, but we’re winning. We’ve been passing a lot of cars and have been all year. It’s one of those deals where we are getting to the front before anyone else and getting some breaks go our way.

“I think I have a really good set-up for the daytime surface. A daytime surface is definitely different. It tends to lose grip, and I don’t know what we have to do, but I need to find this kind of grip on Saturday night.”

KEY MOMENT: The beginning of the event was littered with caution flags, including three on the initial start.

The third took out one of the frontrunners. Brent Marks got out of shape in the first and second corner, which led to third-place starter Brian Brown doing a 360. He was forced to tag the rear after the incident.

Once the race got going, there were four more cautions before the completion of Lap 6. One of those was for Marks, who also did a 360 and had to tag the rear. It also allowed Dietrich to one spot closer to the leaders.

Dietrich, who started seventh, made his way into the top five. Justin Peck poked his nose under the Gary Kauffman-owned No. 48 during the early stages, which helped show Dietrich the way to the front.

“I was able to pull slide jobs before I had to get to the bottom. We had a situation where Peck showed me a nose, and I thought, ‘I need to at least try that out.’ We were really good down there.”

THE WINNING MOVE: Dietrich got by Logan Wagner on a Lap 6 restart and took over second. Before the lap could be completed, Peck got into Wagner in Turn 3, and the three-time track champion spun.

On the restart, Dietrich nailed the bottom in Turns 1 and 2 and got a run down the backstretch. Heading into Turn 3, he ducked under leader Hunter Schuerenberg and grabbed the lead.

“I could park it pretty good going into three,” Dietrich said. “It slowed down, and I could still hit the rubber. I was really stuck, and the car was really good.

“I took the lead and then missed the bottom in Turn 1, so I was like, ‘Don’t do that again.’ I’m just happy to get another win. It’s been a really good year, but we just don’t have the wins. Hopefully, the wins are coming now, and we can put together our best season yet.”

It was another solid run for the Clute, TX., native. He started 10th on the grid, took advantage of misfortune by other drivers, and pounded the top early to charge into the second position.

Once the track rubbered up on the bottom, Reutzel was forced to follow Dietrich for the final 17 laps and finished 2.980 seconds off the pace.

“I felt like I had a great racecar, but you know the rubber is coming,” Reutzel said. “I felt great, even when it did come. I found it — I was probably fourth — and the was able to get by Hunter and Peck out of the rubber.

“I feel really confident in our car, right now. We made some pretty big gains on our car since Friday, and I’m pretty excited for the weekend coming up. I think we are only going to get better and better as me and [Tyler] Swank work together.”

BY THE NUMBERS: This was Dietrich’s fourth Labor Day Classic victory in the last eight years. It was also his first Port Royal win of the season and fifth overall in 2021. He’s won two of his last four starts.

As for Aaron Reutzel, it was only his fourth race with Ridge and Son Racing. He already has a win and a second-place finish. Stay tuned.