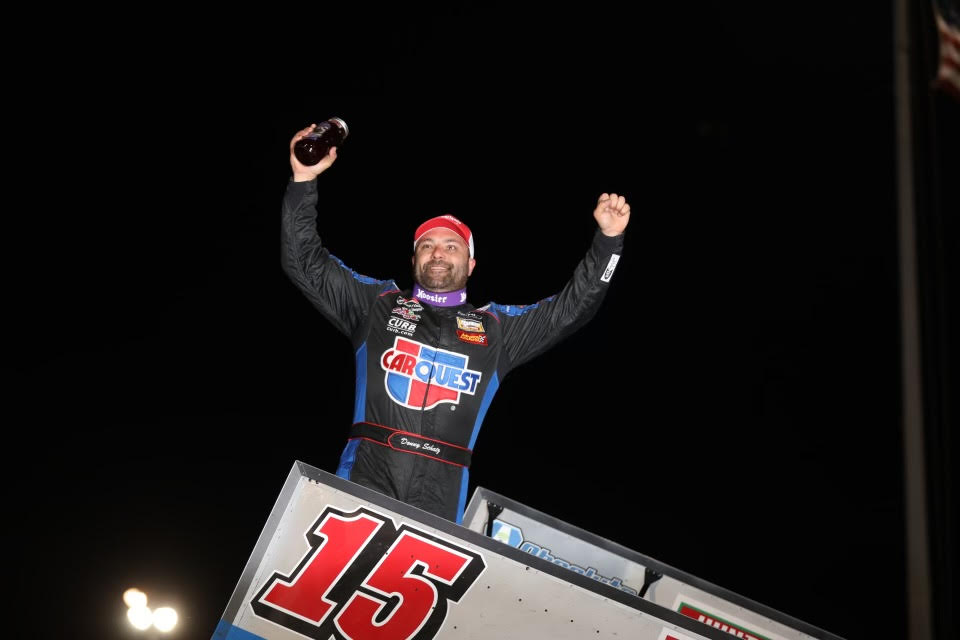 TAMPA, Fla.: Donny Schatz was probably at a slight disadvantage against the field Tuesday night at East Bay Raceway Park.

The last time the 10-time World of Outlaws champion raced at the Tampa, Fla., facility was roughly 25 years ago. That’s a long time considering a lot of the other competitors in the field raced at East Bay last season.

But that doesn’t really matter to a guy like Schatz. He has a good team and is considered one of the greatest Sprint Car drivers of all time. In other words, familiarity means little to someone with his talent behind the wheel.

That showed in the 30-Lap main event. Schatz stayed near the front of the pack and took the lead from Justin Peck at the halfway point before claiming his second All Star Circuit of Champions win of the season.

“This place is really neat, but it’s also very tricky. So, you have to respect it. It’s got a different dirt, it has greasy spots, and the dynamic changed so many times that it actually made it fun.”

It’s always fun when you win, and Schatz took advantage of some misfortune by Cory Eliason in making his way into the top spot.

Eliason beat Ian Madsen into Turn 1 on the start, with Schatz, who started third, shooting to the low side to take second off the second corner. By Lap 5, Eliason increased his lead to .801 seconds.

As for Schatz, he was moving around the track. He switched lines at both ends of the speedway and was looking for the fast way around. That probably cost the North Dakota star on Lap 8, when Peck got a run in Turn 3 and took the runner-up spot.

One lap later, Eliason’s chance at win No. 1 in 2021 came to an end in the third corner. Chris Windom spun, and the California driver had nowhere to go and came to rest between Turns 3 and 4.

With Eliason out of the race, Schatz went to work on Peck, showing his nose to the leader on the inside of Turn 1 on Lap 14. On the next circuit, Peck went low, and Schatz got a run off the top and shot to the bottom of Turn 3 to blast into the lead.

“I had to go wherever I had to, bottom, top, middle,” Schatz said after the $6,000 win. “We were really trying to work on getting our racecar to work in all groves, so at the beginning that’s what I did.

“Cory got caught up in something and was really pounding the top, but these Carquest guys, Ford, they are doing a tremendous job.”

Schatz opened up a 1.197-second lead within two laps. That was wiped out on Lap 18 when a yuke tire ended up in the racing groove.

On the restart, Schatz opened up a one-second lead, with Ian Madsen passing Peck for second. Kerry Madsen, who started 17th, was also on the move and disposed of Tyler Courtney and Peck to take over third on the 19th circuit.

The Madsen brothers put on a show around the East Bay facility. They sliced and diced through traffic, with Kerry Madsen poking his nose under his younger brother in the corners lap after lap.

But neither driver had anything for Schatz. Ian Madsen closed to within .754 seconds with two laps to go, but Schatz hit his marks in the closing stages of the event and took the win by .743 seconds.

“I’m getting to the age where nothing really matters anymore, so you just go for it and do what you can and get going,” Schatz said. “If you race at that pace enough, you can keep escalating and keep things going.

“That’s the name of the game, so we keep doing our best. When our race team gives me a car good enough to do that, it’s a lot of fun for me to be a part of it.”

Ian Madsen fought off his brother to land a second-place finish, his best of the season. Kerry Madsen earned hard charger honors for third, and Courtney was fourth. Gio Scelzi drove from 13th to fifth.

“I knew [Kerry] started way back there, so I didn’t expect him to get up there,” Ian Madsen said. “Compared to the last two nights, this was awesome.

“I can’t thank those guys enough, everyone on the team. It’s awesome to be a part of it, and I think we showcased tonight what we can do.