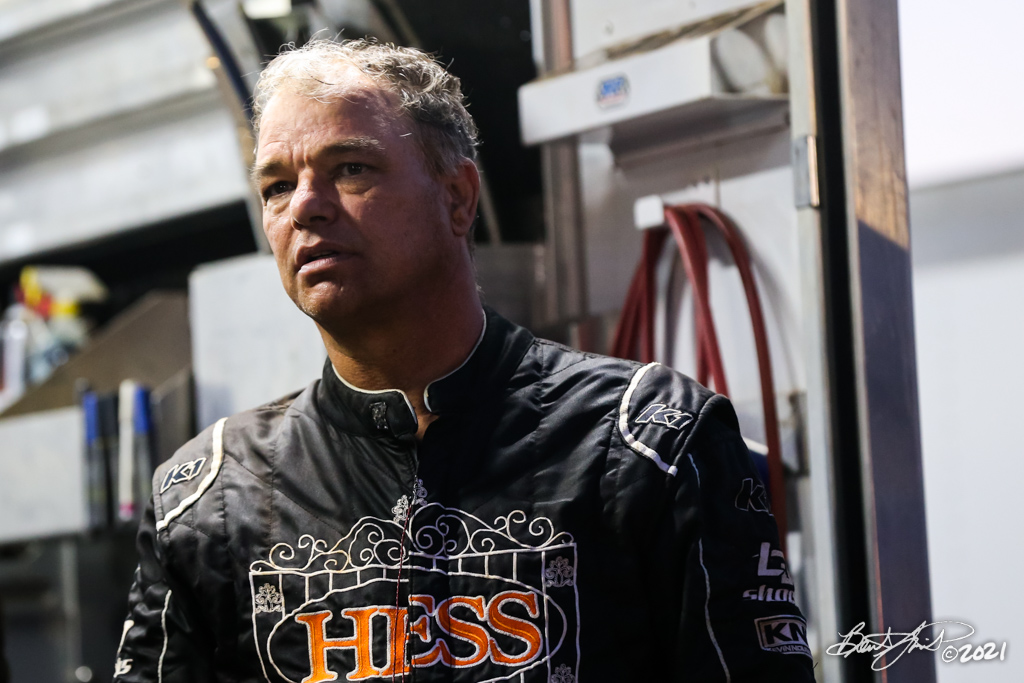 His fourth speedway win of the season in the Kreitz Racing 69K was worth $5,000 and came on the opening night of the 167th Annual Juniata County Fair and one week prior to the Tuscarora 50.

Curt Stroup led the early laps of the 25-lap main event over TJ Stutts and Pat Cannon. Stroup stayed on the cushion, while Stutts worked inside of him in the corners.

It was close racing with Stroup edging Stutts for the lead. Meanwhile, Dewease was working his way forward from his 12th starting spot.

Stroup and Stutts swapped the top spot at each end of the speedway as Cannon was right behind their battle now.

Stutts finally wrestled the lead away with an inside move through turns three and four with nine laps completed. Dewease was up to sixth at this point.

“We’ve been able to pass cars all year, everywhere,” Dewease said. “We’ve been pretty good here most of the year. We got by the guys we needed to get by early.

“I was really worried about Brent [Marks] starting sixth. I thought he might be really tough to catch. He never got going, and we got by him, so that was really critical. We got by the guys that can run the wall and make a lot of speed.”

The yellow flag flew with 10 laps completed for debris on the racing surface. This erased Stutts’ one-second lead.

A wild scramble ensued on the restart. When the next lap was completed, Dewease had raced into the third spot behind Cannon and Stutts.

“It kind of opened up,” Dewease said. “You race with these guys enough; you know their habits. I knew where everybody was going to go, and we got a really good start and got a good, clean run around one and two and had some speed and got by them quick enough.”

He grabbed second from Cannon with 12 to go. As he so often does, Dewease was working the middle through turns three and four to perfection, which allowed him to close on Stutts.

“I felt really good in the middle of three and four,” he said. “I felt pretty good there all night and never ran the top because I didn’t feel like I had to.”

He was inside of the leader but couldn’t quite pull ahead off the corners, as Stutts powered off the top.

Dewease’s middle groove was just too good in three and four, as he grabbed the lead with nine to go. Dewease, however, had lost his brakes on the 69K and had to adjust this driving.

Brent Marks raced by Cannon for third. Cannon tried to battle back as Dewease streaked away. Danny Dietrich was up to fifth, but his and Cannon’s good runs came to an end with two laps to go. Dietrich stopped with a flat tire, and Cannon also had a flat and headed to the infield.

Dewease continued to pound the middle and controlled the restart. He led the final two circuits for career win No. 119 at Port Royal.

“The competition picks up here in a couple days,” Dewease said about the upcoming Tuscarora 50. “It gets a little tougher. We’re pretty good here. Even when we don’t win, we can pass cars. It’s tough here if somebody gets out front and can run the wall. You can keep pace, but that’s all you’re doing.

“This was a new car tonight. The car we had been running, we didn’t like. The car we ran last night, it’s been one of our good cars. We had another car that we put together that was new that we didn’t really care for. I picked up this car up from Maxim, and they assembled it this week. So far, it felt pretty good.”

“I drove through the middle and it stuck pretty good,” Wagner said of his late charge and the final restart.

Said Marks, “I got a bad start and went back to ninth and had to really get up on the wheel to make up those spots. Got to work on the car and get a little more comfortable.”

Heat races for the 31 cars were won by Cisney, Lucas Wolfe, Tyler Bear and Cannon. Kody Lehman won the B-main.